GameSir G3s is a gamepad that can be used with Android devices, Windows computers, and PS3 consoles. It currently costs about $30 and we've been using it for about 7 months. Is it worth it? Well, let's find out! 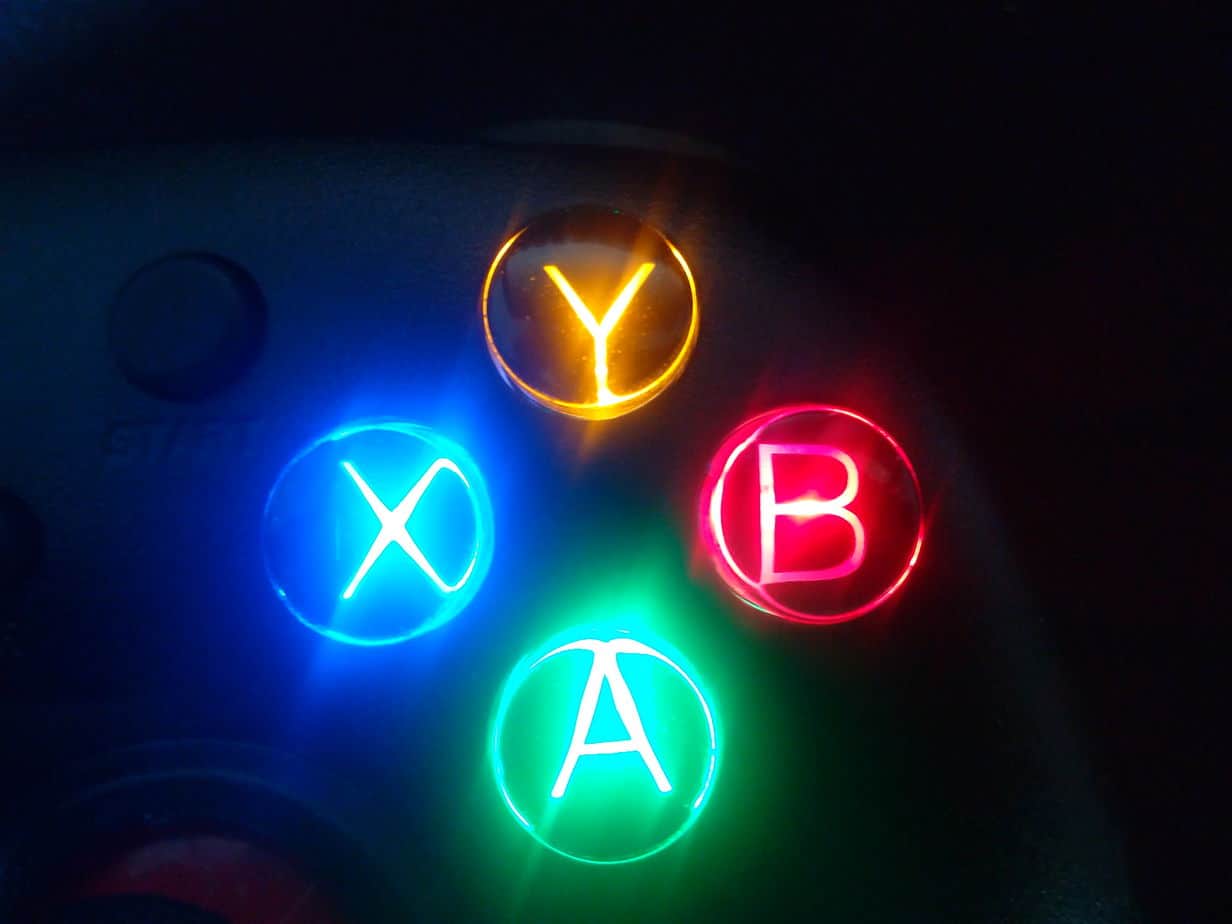 The whole look and feel is kind of similar to that of a PS4 controller. Definitely doesn't feel cheap or anything like that.The layout is also very similar to a PS3/PS4 controller. You'll find two analog sticks in the middle with the power button being in between them. Above it are the Turbo plus Clear buttons and above those the Select and Start buttons.Behind the gamepad, there are the R1/R2 plus the L1/L2 buttons. The left side of the gamepad hosts the Dpad while the right one hosts the A, X, Y, and B buttons.Speaking of buttons, you'll notice how the mapping matches the Xbox controller as only Microsoft uses the A, X, Y, and B layout. And I can hear you asking, is that a good thing or a bad thing? Well, it depends.If you're planning on using this gamepad with a PS3 console only, then you may get confused. That's because PS3 games display the Dualshock button layout and not the Xbox one. For an example, the X button in PS3 stands for the A button in GameSir.On the other hand, if you're planning on using this controller only with your Android device and your computer, then you're likely to have a normal experience at worst. 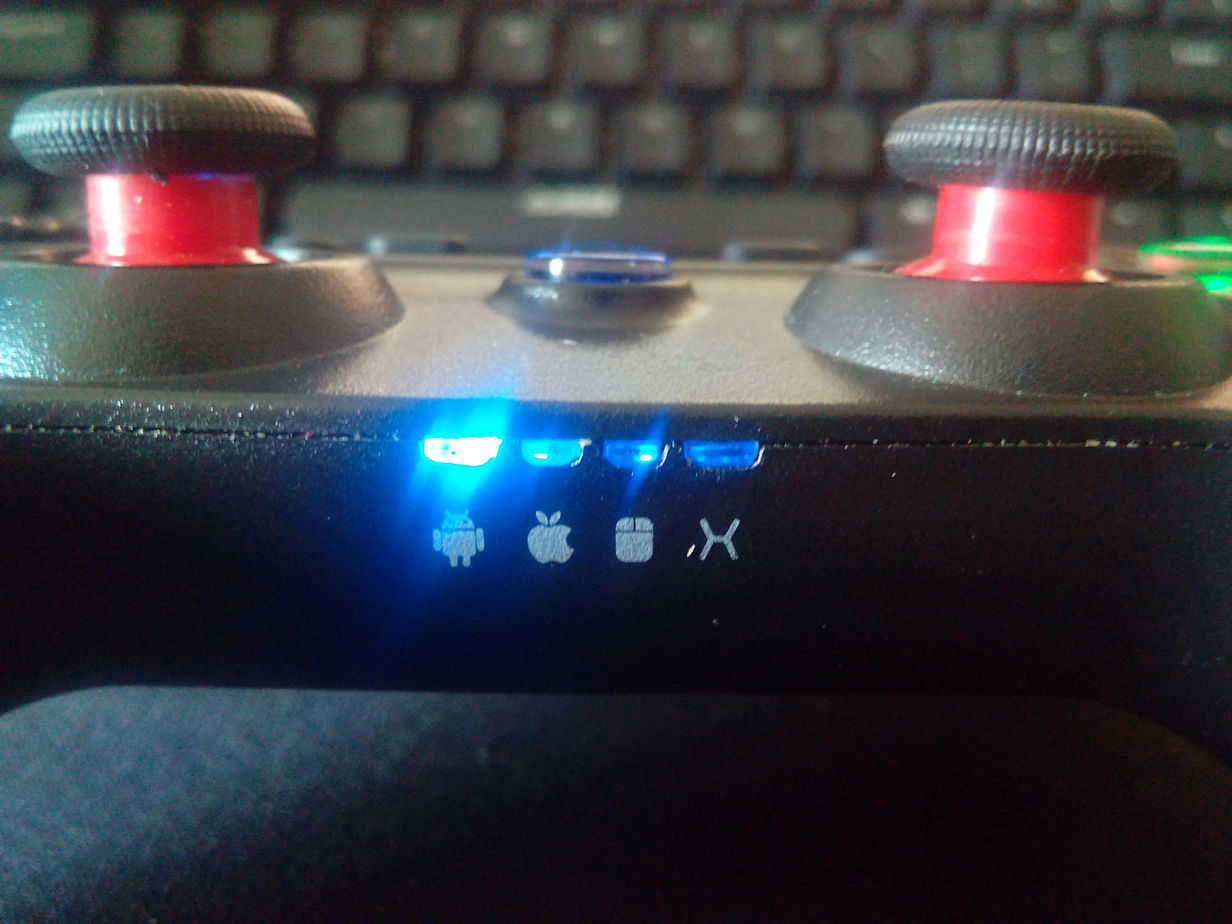 This is something that we particularly liked with this gamepad. The GameSir G3s uses 4 indicators to display if it's connected to an Android, iOS, or a Windows device. The extra mouse indicator will show you if mouse input is activated or not.The A, X, Y, and B buttons light up as well when you turn On the controller. The markings stand behind a protective layer which means that they are not going to wear out over time.If you wish to turn off the lights while playing, then all you have to do is hold down the R1 + L1 buttons for 5 seconds. That also seems to save a bit of battery life.On a bad/negative side note, your option of turning off the lights doesn't get saved. So, if you really don't like the lights and prefer playing with them off, then you'll have to turn them off manually every single time.

The GameSir G3s can be used wirelessly either with Bluetooth or with its 2.4 GHz dongle. You can use Bluetooth to connect with an Android device while the dongle will come in handy for PC or console gamers.Over the 7 month period of using this device, we rarely encountered connectivity issues or anything related to that. However, do keep in mind that a lot of people mentioned that they encountered connection loss problems with the 2.4 GHz dongle. Still, GameSir on Amazon mentions that they fixed that and as mentioned above we rarely had any issues. 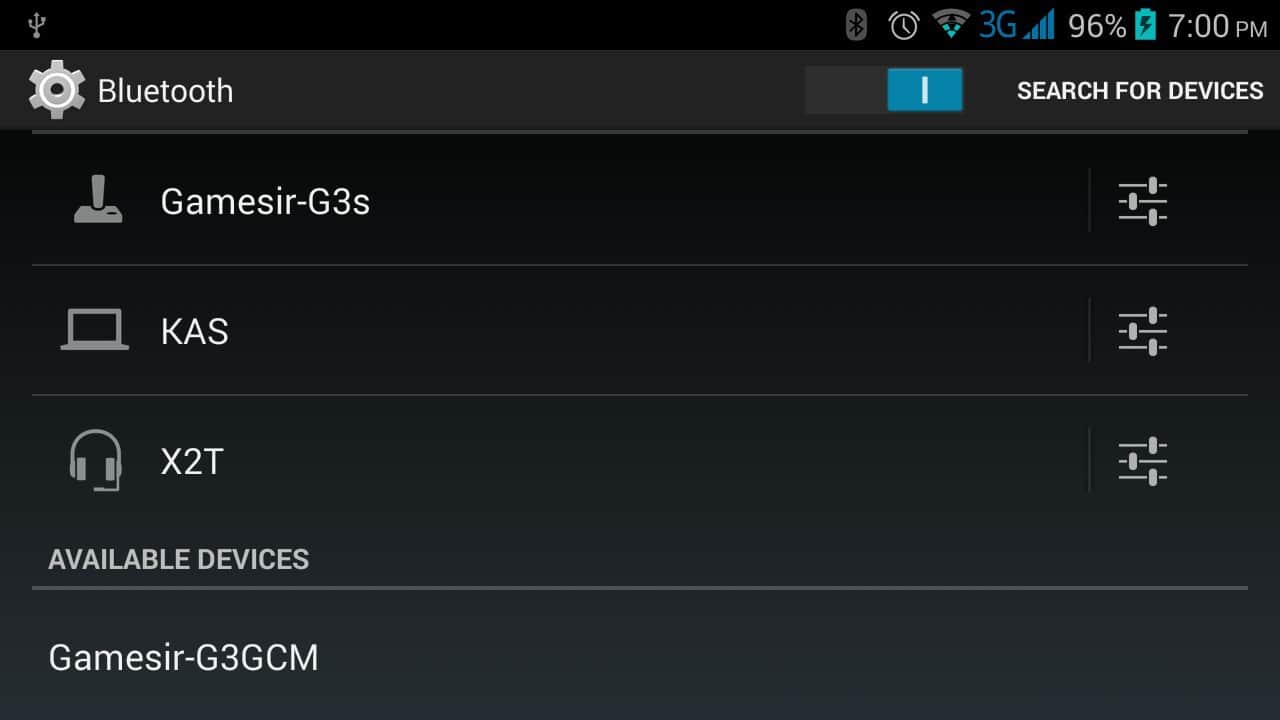 Speaking of issues, there is one small problem that we encountered which you can easily fix if you know how to do it beforehand. While connecting via Bluetooth, you'll first see a device named Gamesir-G3GCM. Do NOT connect to it or you'll get an error. Instead, you'll have to wait for a few seconds until a new device comes up that's named Gamesir-G3s. That's the one that you're looking for. 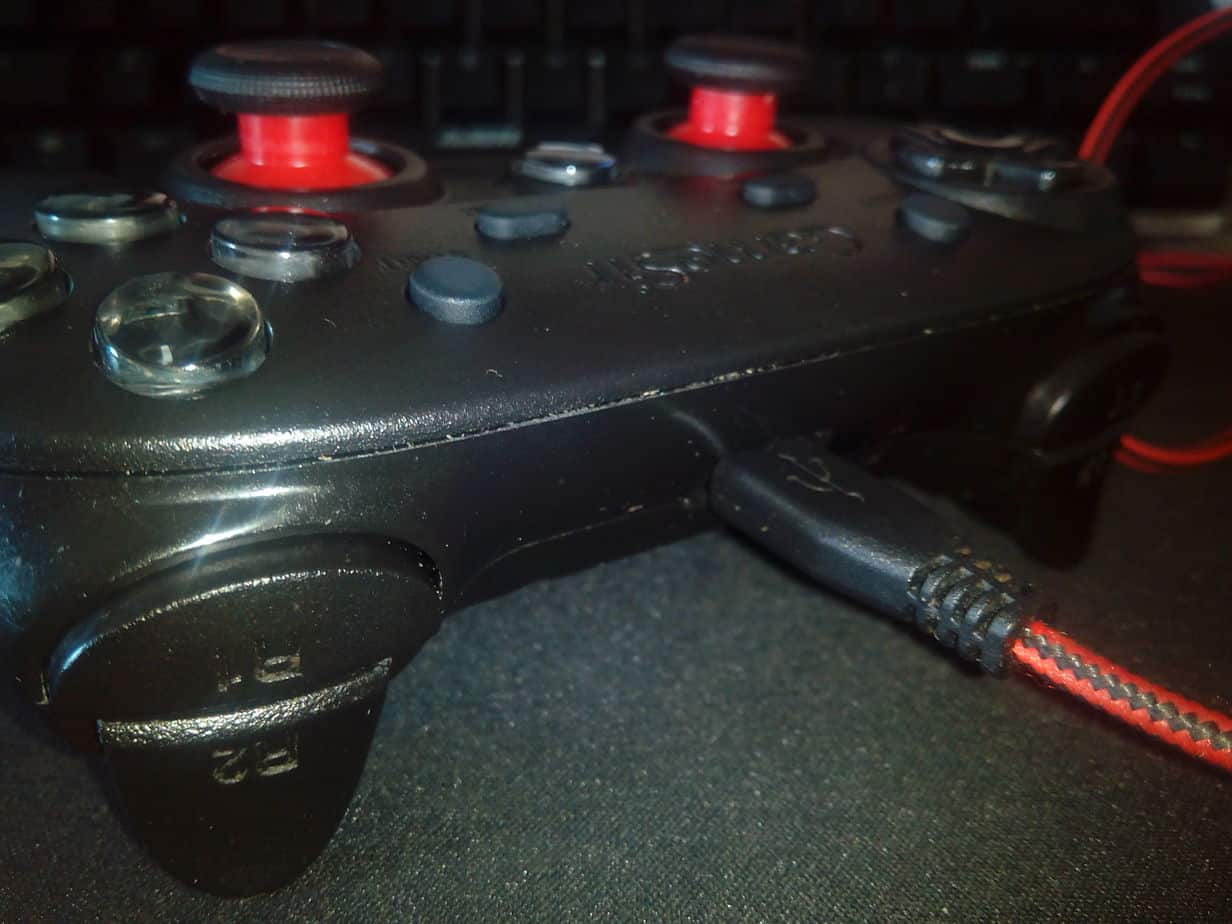 GameSir promises about 16 hours of battery life and we most certainly came close to that with the lights and the vibration Off. However, with both lights and vibration On, the battery life is significantly lower. About half of what is promised to be precise.Still, under normal usage, you'll probably even forget that the GameSir G3s needs to be charged. And if you find ever find yourself in a situation where you need to play but your battery is empty, you can just plug the controller right in and play wired without needing to charge. That's assuming that your phone supports OTG (On the Go) functionality.Speaking of charging, this gamepad uses a micro USB cable for charging. You can either use your phone charger or a computer. We've been charging it with a computer ever since we got it and never faced any issues.

GameSir G3s officially supports Android, Windows, and PS3. iOS is unofficially supported. And we tested it with all of the above-mentioned platforms except iOS.It worked wonderfully well with every single platform. Especially with our Android smartphone and our Windows 10 computer. In fact, this is the gamepad that we used for making the "GTA 5 on Android" article.However, do keep in mind that an Android game must have gamepad support or it won't work with this controller. There are games that have native controller support - like Asphalt 8 and others that don't - like Angry Birds.If there's one issue that we encountered then that would be that our PS3 console didn't recognize it immediately. We had to unplug it plug it back in again for it to work. Other than that, there's also the weird Bluetooth connectivity thing that we mentioned on the connectivity section.Additionally, there's the fact that you need to remember a bunch of different button combinations for connecting to a different device which can be confusing at first. For an example, you need to press the power button + the B button for connecting to an Android device and the power button + the X button to connect on a Windows device. You get the point.Even still, after using it for a while, you will get accustomized to using these combinations and you'll be able to connect to a bunch of different devices without even thinking about it. 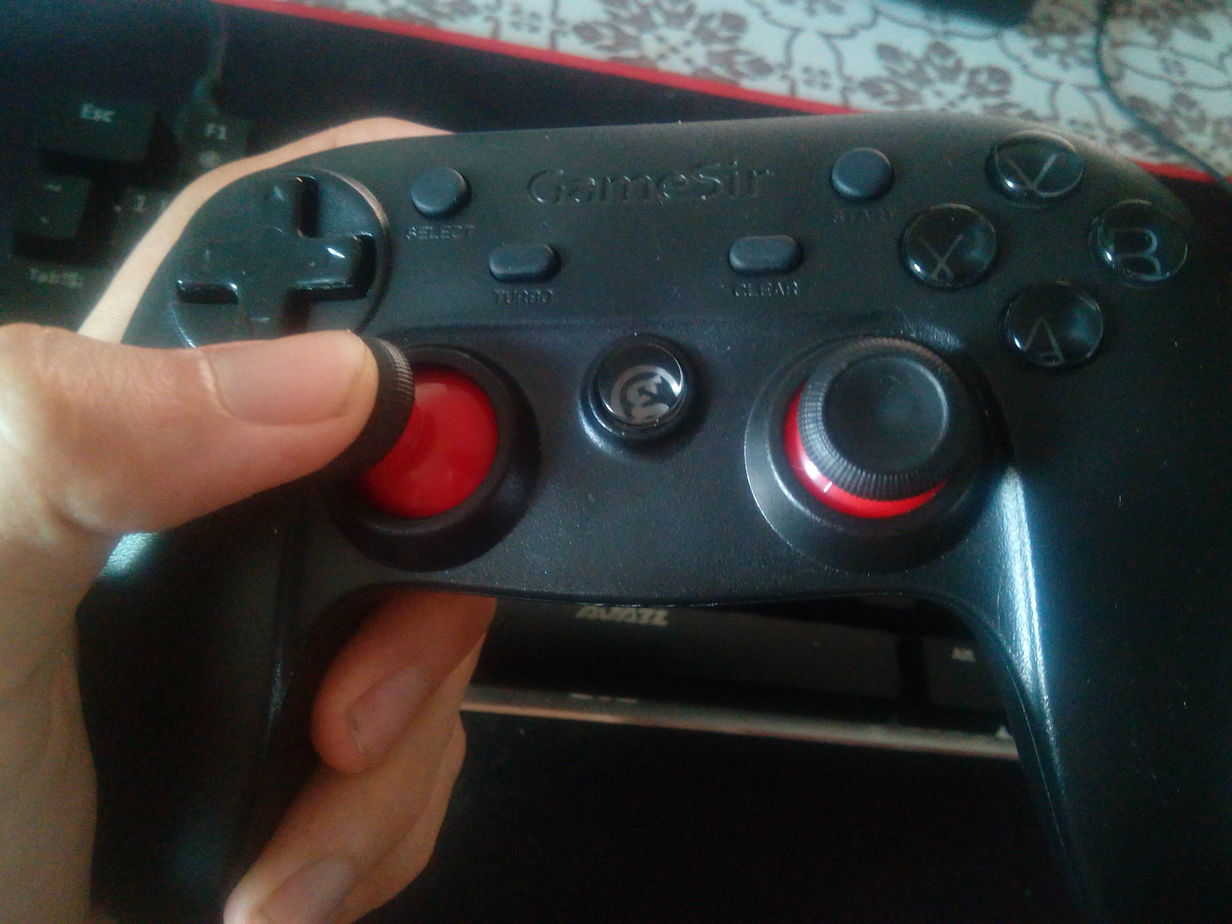 When it comes to performance, the GameSir G3s is absolutely a step or two above your average generic gamepad. We've been using it for 7 months now and it still works like brand new.It features two rumble motors plus pressure sensitive buttons on the back. The vibration could most definitely be a little bit stronger but that's not a big issue. Also, the analog sticks do seem to have a little bit of deadzone which is most noticeable in racing games.Other than that, the buttons did felt a little bit mushy which can be a deal breaker if you like fighting games. Nothing too bad for casual gaming.The pressure sensitive R2 and L2 buttons were some of the best that we've ever tried. It's just insane to see how much detail they capture when it comes to movement and that's an absolute must-have feature for competitive racing games like Dirt Rally.

If you need a high-quality gamepad for your Android device which allows you to use it with computers as well without having to spend a fortune, then look no further. The GameSir G3s is the right option for you.We give it an overall rating of 9/10 and that would be a perfect 10/10 only if the buttons weren't so mushy. It's a great value and it's hard to go wrong with it.As a side note, if you own a PS3 and you solely need this gamepad for your console, then we would suggest you get a PS3 controller instead because the GameSir doesn't seem to have long-range support.

Get the GameSir G3s from Amazon