HTC U12+ Red now available for pre-ordering in the US 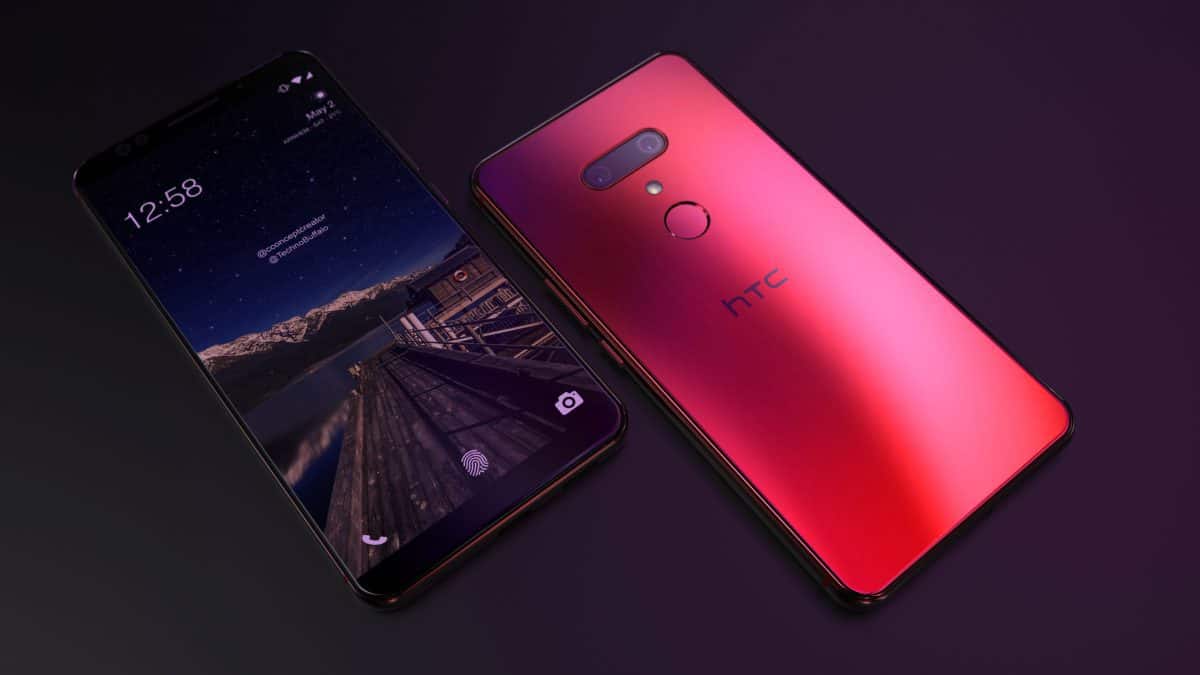 The HTC U12+ Plus was originally available in 3 colors. But, for some reason, the red version never really made it into the US.That was until now. From now on you can pre-order the HTC U12+ Flame Red in the US. The shipments are expected to begin in the next month.Of course, nothing else changes with this version of the U12+. Specs are the same and so is the price at $799.On a side note, this is not just a simple red. Even by simply looking at the picture above, you can clearly tell how the color changes depending on the lighting conditions and the viewing angle.To be more precise, the back of the device slightly takes different hues of blue and purple. At the moment, you can only pre-order the Flame Red version from HTC's official website. However, that may change very soon.

It's no secret that a huge battle has been going on between Android and iPhone users for, well, ever since Android was introduced. The arguments and excuses for each side vary from pricing to ease of use and reliability.So, at the end of the day, why do some people prefer iOS while others prefer Android? Fanboyism aside, an interesting survey from PCMag comes to prove exactly that. 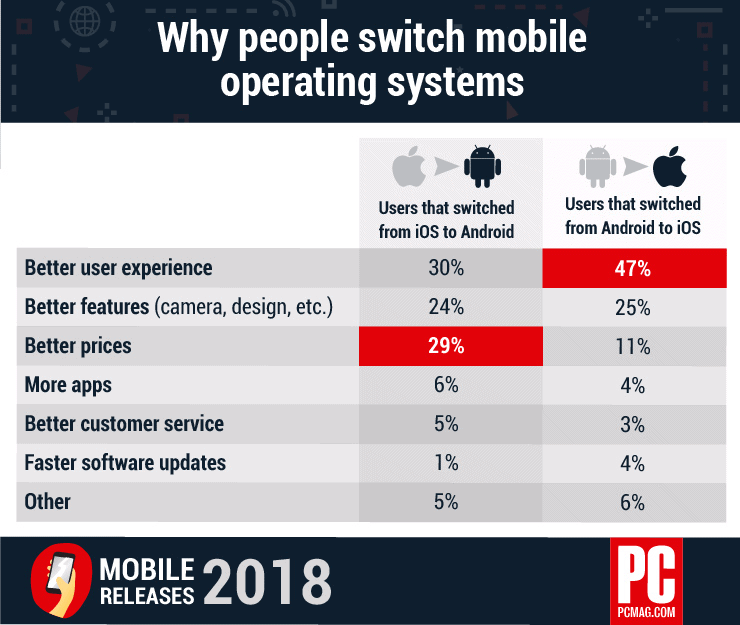 As you can see in the image above, those who switched from Android to iOS did so because they got a better user experience with it. On the other hand, those who switched from iOS to Android mentioned that did so because the prices were much better.Both sides seem to have valid points. If you're absolutely looking for something affordable, then Android is a one-way road. As for user experience, well, to be fair, that mostly comes down to personal preference.However, nobody can deny that iOS is just a bit more simple to use. You don't need to make any research on what phone to buy, you don't need to customize anything, you just grab the device and you're mostly ready to go.So, which one is the best? In our opinion, whatever fits each one of you personally and individually.We're obviously Android fans simply because it gives us the freedom to choose whatever we like and also unlimited customization options.What do you think about all this? Are you considering a switch from Android to iOS? And if so? Why? Let us know down in the comments below!

You can't disable the Bixby button on the Note 9 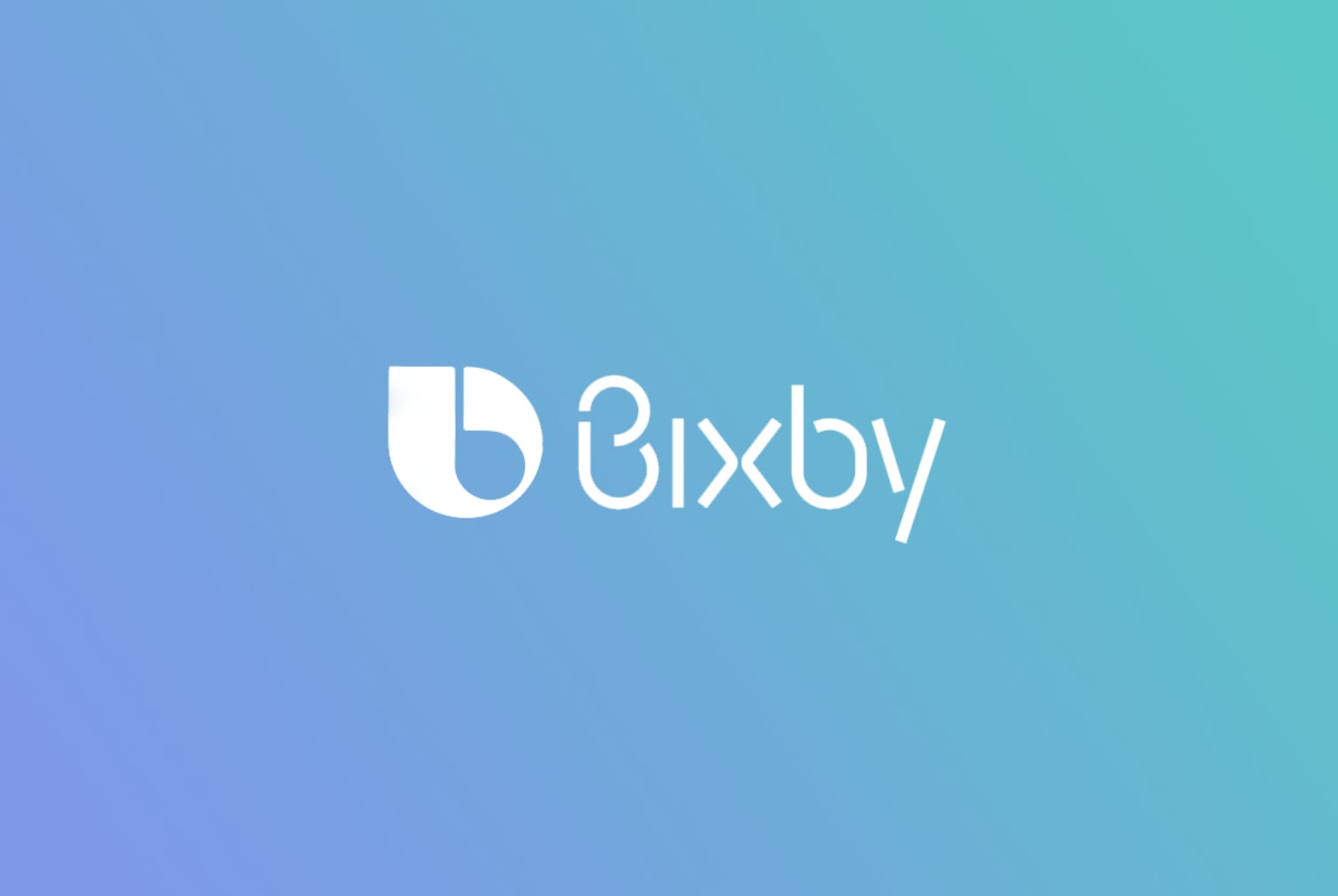 Bixby is the unique voice assistant for Samsung devices and it has its own dedicated button. In older models, even though you couldn't remap it for a different function, you could easily just turn it off. Most people did that to avoid accidentally pressing it.However, as it turns out, you won't be able to that with the Note 9. The setting which allows you to turn off the dedicated button for Bixby is just not present for it.We currently don't know if that will change with time and the only way to really find out is to wait and see. Chances are that you'll eventually be able to do something about it just by rooting the device and using a 3rd party app which requires root access to change that. But, yet again, you can never know what happens tomorrow.What do you think about all this? Would you rather have the option of remapping that button? What about turning it off? Or would you rather not have a dedicated button for Bixby at all? Do let us know in the comments.

Google seems to be collecting much more data compared to Apple

From what we saw in the Google data collection paper of Digital Next Content, Google seems to be collecting several times more information from its users compared to Apple. This probably has something to do with the fact that Google relies so much more on ads.But, still, this gives us something to think about. It truly makes you wonder just how much information you're giving off both in Google and 3rd parties - regardless of if this information is user identifiable or not. 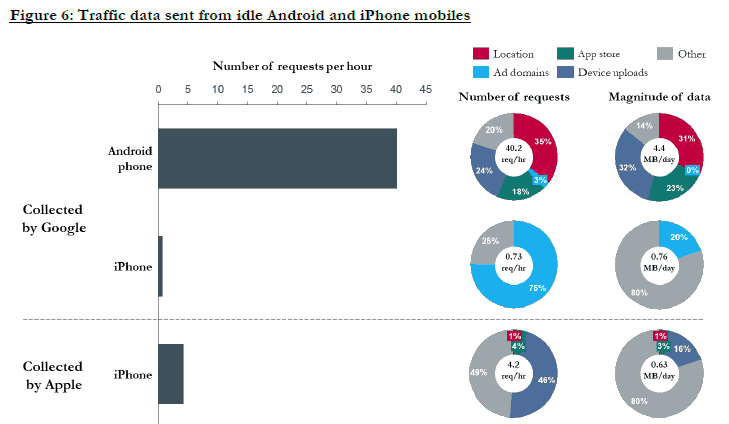 Now, you're probably wondering just how much of that information is actually true and whether or not you can believe it. Well, we'll leave that decision up to you.All we know is that this information is all around the web by multiple reliable sources and this whole thing actually makes sense. After all, Google relies a lot on the information that it collects for its targeted advertisements.Facebook also utilizes a similar approach and it has gotten into a lot of issues before thanks to it as this got millions of people around the world worrying about their privacy.So, how do you feel about all this? Would you rather pay a little more for Android so that you wouldn't have to give up the same amount of information? Or are you just fine with things as they are now?

More often than not, when it comes to big names/brands, there are so many leaks and rumors about them that we always end up having the full image before the official announcements. Turns out that this will be the case with the Pixel 3 XL as well.Now, we usually don't really bother too much with rumors, leaks, and stuff like that. Mostly because it's better to get everything right from the source - rather than wasting time with information that may or may not be reliable.However, this picture looks way too real to be fake. Check it out. 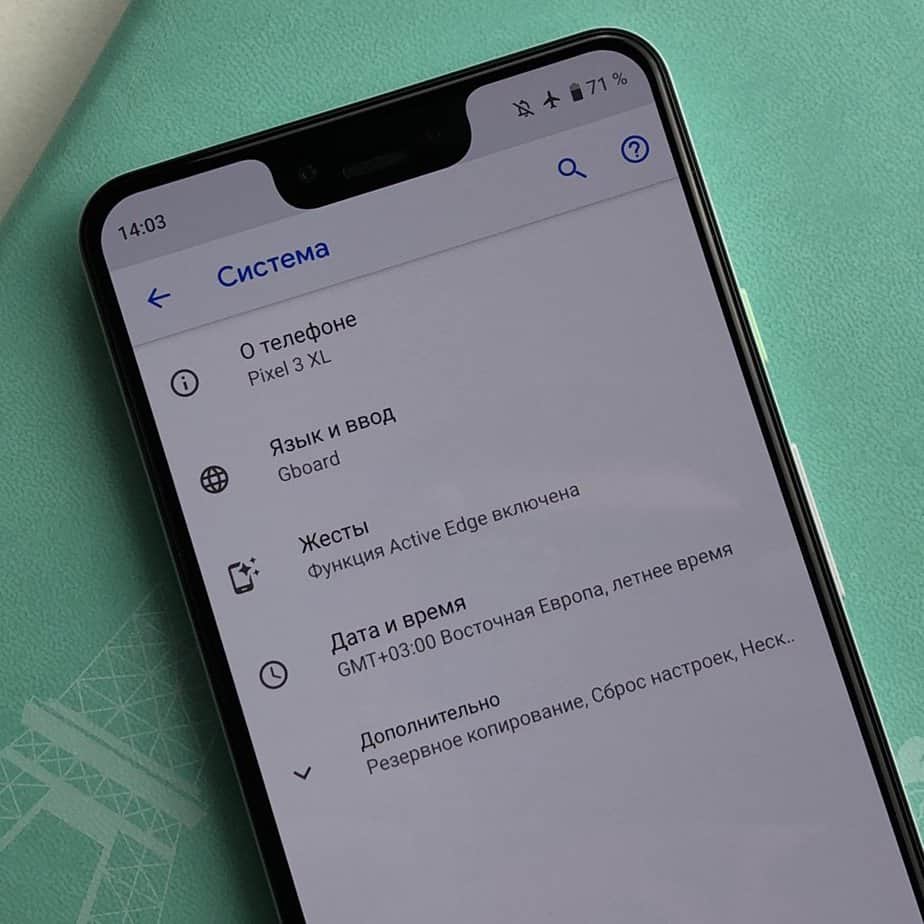 Yep! That's a notch alright. Seems like Google will be following on Apple's trail and that will surely displease a lot of people.As for specifications, well, other leaks point out that it'll have a 2960 x 1440 6.7 inch display with an 845 Snapdragon Chipset and a 3430 mAh battery. However, do take everything with a grain of salt. Cause, at the end of the day, this is nothing but rumors.

The Poco F1 is one of the cheapest Snapdragon 845 devices as it'll only cost about 300 bucks. We happened to find it on Xiaomi's official website and you can expect it to launch on India in a few days from now.When it comes to the overall design, more and more devices seem to be following on Apple's and Huawei's footsteps. You can see how the Xiaomi Poco F1 has a notch in the top and dual cameras on its back.As for specifications, well, let's take a look. The Indian prices are at about 300 bucks for the model which has 6 gigs of RAM and 415 bucks for the 8-gigabyte configuration. Those of you who currently reside in India will be able to get it from the 29th of August. The rest of us will have to wait till the 27th of August to receive more information about the release of the Poco F1 in other countries.If we can also get the same specs in the same price, then we're talking about the cheapest Snapdragon 845 device to date. It's really quite amazing to see how cheap it is.

Note 9 durability tests reveal that the side buttons come off

https://youtu.be/sfwkl3QegtgToday is the day. The Galaxy Note 9 is about to get released. But, ever since it was announced, anyone who was able to get his hands on one would perform various tests on it.One kind of testing is durability testing. Durability testing is all about, well, testing the endurance of various devices.The Note 9 was bound to get durability tested by someone at some point and it did. It seems to be fairing very well in all kinds of tortures. However, one strange thing is that the side buttons can easily come off.This is most certainly not a deal breaker or anything like that. Even if the buttons come off, it's really easy to just put them back in their place and everything keeps on working normally.Do you think that we missed something important? Then let us and the whole world known in the comments down below!Like what you see? Then don't forget to follow us on Facebook and Twitter for the latest news, reviews, and more!