This week, on our weekly news roundup: OnePlus 6T gets officially revealed, Samsung keeps on losing market share while Huawei gains, and more.

There is no doubt that people love the new Note 9 from Samsung. However, it seems like it just keeps on losing market share while Huawei keeps on gaining more and more of it.Maybe this happened because of the Mate 20 Pro that we recently looked at. It's most certainly a very beefy device with 3 cameras and a fingerprint scanner that lies under the display.Not to mention that there's also Xiaomi which keeps on releasing phones that offer great value. Speaking of Xiaomi, they also got a bit of an increase in market share.In conclusion, when it comes to market share, Samsung still retains the first place with Huawei and Apple following after them and Xiaomi lurking in the 4th place.However, if Samsung keeps on losing ground like that, then it's entirely possible that Huawei will overtake them.

Rumors and potential leaks about Samsung's portable phone are everywhere

https://youtu.be/MKG7XRsG9KQThis is how Samsung envisioned foldable phones back in 2014. Though, do try to ignore the weird plot about the woman liking guys with fancy technology. If only it was that simple. But, anyway, back to the matter at hand.The main concept is that you can get a big tablet and a phone in one. You get the portability of a small phone and the pleasant user experience that a tablet offers. Sounds cool right?Various rumors and potential leaks are saying that Samsung may have indeed been working on something like this for a while. The name is mentioned to be Samsung Galaxy F or X but do take that information with a bucket of salt. 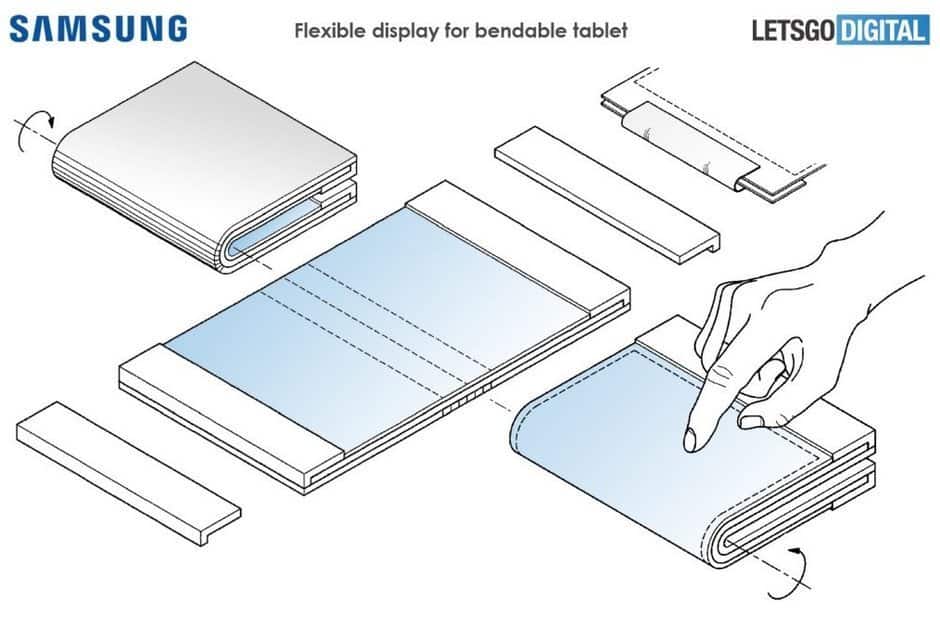 This is Samsung's latest foldable tablet design which was last seen a few months back and got published by Let's Go Digital. You can fold it both inwards and outwards depending on how you want to use it.We just hope that the actual device won't have such huge bezels. It likely won't, but we're just saying. In any case, we don't even know if such a thing will ever become official yet. 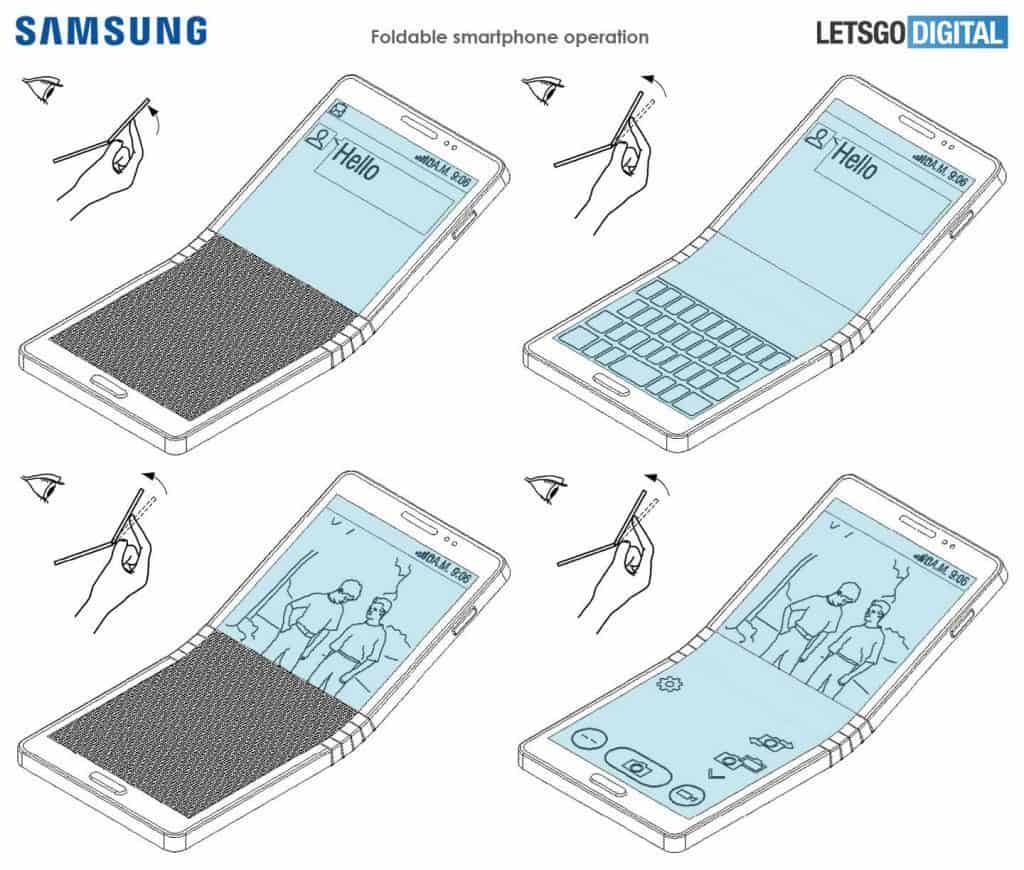 This is another patent which shows a foldable phone. This is probably more about having a big phone that's portable rather than an actual tablet.We can most certainly see how this would be useful. Though, at 6 inches and above, it's already hard to use a phone with one hand. The small portable idea seems like a better idea for the most part.Other than that, the rumors say that these devices will cost around $2000 and that we'll see the functioning prototypes in early 2019.With that being said, someone managed to release a foldable tablet before Samsung. Let's take a look at it.

https://youtu.be/ZjdGhHLQIH4This is the Royole FlexPai - the world's first foldable phone/tablet. It comes with some serious specs along with Android Pie and a 7.8 inch display which comes down to 4 inches. So far so good right?Well, the problems start with the extremely big bezels and the thickness of the device. Don't know about you but we don't like them "thick". This "phone" is rather big even when folded. So, portability is surely not its strong point.How about usability then? Well, we suppose that you could use the folding screen as a stand. But, at 4 inches, the user experience isn't all that great. You may as well get a folding Laptop which works much better for this kind of thing.Don't get us wrong. From what we've seen up to know, the UI adjusts normally as it should to both modes.However, what's the point? Samsung's concept of a portable phone was talking about a device that can be as big as a tablet and as portable as a phone. Portability and usability in one.Why buy the Royole FlexPai then? We just don't get it. You may as well buy a normal tablet and it would still offer a better user experience than this.Now, to be fair, the dual-view camera mode which allows shows what you're capturing in both sides of the screen could be useful when you're taking a picture of someone. But, that's about it.

Overall, this phone comes with some great specs. The 3,800 mAh battery may be a bit small for an 8 inch display, though. Doubt that you can easily get a day of usage out of this.The only problem is that this device feels very rushed. It's just too thick to turn it into something portable and the bezels are awful.From our perspective, Royole just tried to get ahead of Samsung simply so that they can get the name of the company which released the first foldable phone and this is the result.No offense to Royole, but we sure hope that Samsung's foldable device won't be that thick. Otherwise it may not be worth it. Not to mention that the price gets close to $2K if you want the version with 512 gigs of memory.

The OnePlus 6T is officially here and it looks beautiful. Again, the notch may annoy some people but it's pretty small anyway. So, no big deal?In any case, the phone is made of glass and metal and also comes with rather powerful hardware. It's a premium device no matter how you look at it.Good thing that the price is not that much on the premium range too. This may be one of Xiaomi's biggest competitors right now.The fingerprint scanner is on the screen which is definitely awesome, but there's no headphone jack and that may be a deal breaker for some. With that being said, the lack of a fingerprint scanner makes the back of the phone look pretty clean.

On the bottom of the phone you'll find a USB-C port and stereo speakers. Now, of course, that USB-C port can be used as a headphone jack as well with a dongle/adapter.The display is a FHD+ AMOLED one at 6.4 inches. And this may sound a little big, but with very little to no existent bezels, chances are that you won't notice a big difference over 6-inch phones.By the way, FHD+ should be more than enough on such a small screen. It's hard to understand why people complain about the lack of 2K screens on phones when all they do is drain battery without offering much in return. The difference is not that visible at all.The battery is at 3700 mAh which is not too bad. On the camera department we've got dual cameras with the smaller one being a wide angle sensor at 16 + 20 MP along with a 16 MP selfie camera.

OnePlus 6T will come out in 2 colors: Mirror Black and Midnight Black. Mirror Black will cost $549 for the version with 6 gigs of RAM and $579 for the version with 8 gigs of RAM. Both of these versions come with 128 gigs of storage.The Midnight Black versions both come with 8 gigs of RAM and offer either 128 gigs of storage or 256. Pricing is set at $579 and $629 depending on which version you'll get.You can officially order the OnePlus 6T starting from the 6th of November.Feel like we forgot something important? Then let us and everyone know about it in the comments section down below!Like what you see? Then don't forget to follow us on Facebook and Twitter for the latest news, reviews, listicles, apps, games, devices, and more.