Are you eager to get the hottest content from the best anime streaming sites to your mobile device? To get you started, here are our favorite apps for watching anime on your Android phone or tablet right now.

What are the best apps to watch anime?

From the evolution of modern gaming to creating some of the most notable consumer electronics devices, Japan has been a major influence on technology through the years. As well as spawning crazy robots and quirky TV shows, Japanese culture has had a major impact on the West. And if you're a fan of anime, who doesn’t remember the bone-chilling moment when Goku went Super Saiyan for the very first time? 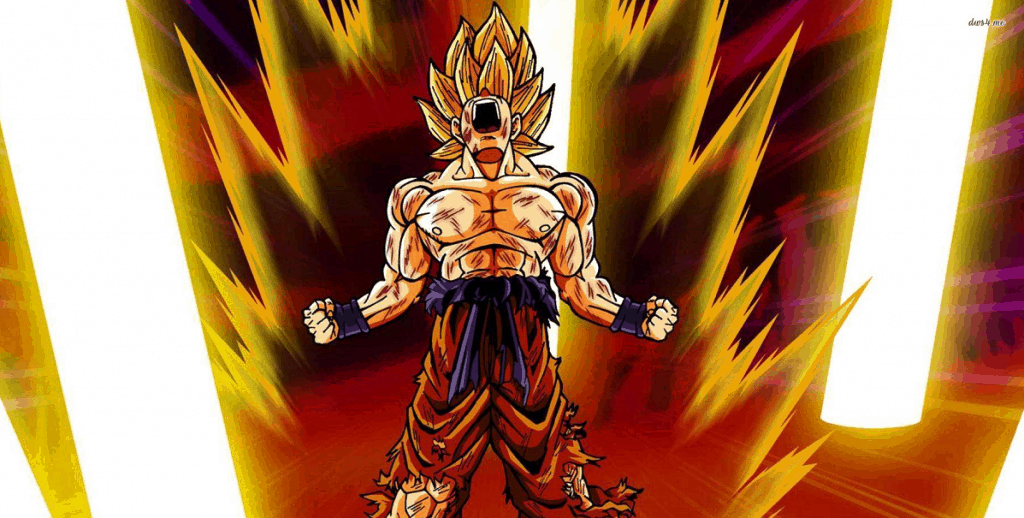 Anime did start off being a Japan-exclusive form of entertainment, forcing outsiders to get the shows through any (and often illegal) means necessary. All of this has since changed, thanks to the seamless connectivity of movies, TV, and anime streaming sites.As Japanese anime culture thrives, so does demand for more ways to watch it. Thankfully, anime viewing isn't restricted to the big screen, since we all carry a miniature TV around with us in our pocket everywhere we go. We’ve compiled a list of apps for watching anime on your Android device, starting with the best, so you don’t have to trawl through the internet yourself anymore.

If there was ever a grand library of all the anime content ever created, they’d name it Crunchyroll. With more than 25,000 individual episodes spanning 950+ anime titles, Crunchyroll sits comfortably at the top of the pack. You also get brand new episodes of all the latest anime series right after they're broadcast in Japan. 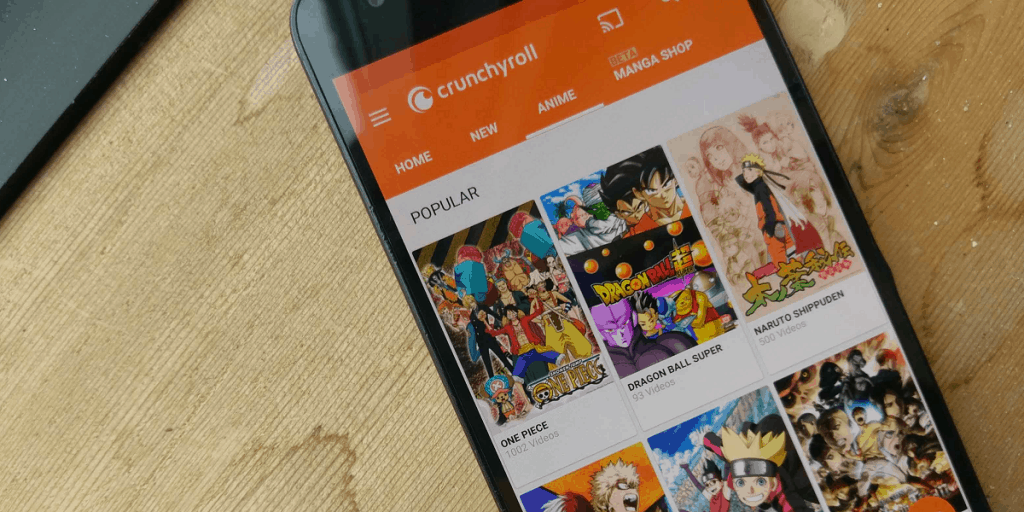 Crunchyroll is among the few anime streaming sites available for free if you can tolerate the dozens of ads per episode. There's a 14-day trial membership which showcases the Premium account costing $6.95/month and $11.95/month for Premium+. Crunchyroll brings you unfiltered access to content in 720p and 1080p Full-HD, along with Chromecast support built in.Plenty of non-anime fans will have heard the name Crunchyroll, which goes to show how popular the service is. After trying out the free version and its numerous ads, the premium subscription fee does seem worth shelling out for.So, if you're living in one of the few regions where 90% of shows aren't region-restricted, this is quite possibly the best app to watch anime at this point in time.

A premium streaming service like Hulu isn’t where you'd expect to find top anime series, but you’ll be pleasantly surprised. Apart from thousands of movies and TV shows, Hulu also maintains an impressive library of anime series. This streaming service brings you not only the classics like Naruto Shippuden and One Piece but also titles like Trigun, Cowboy Bebop, FLCL, plus many more that aren’t easy to find on other anime streaming sites. 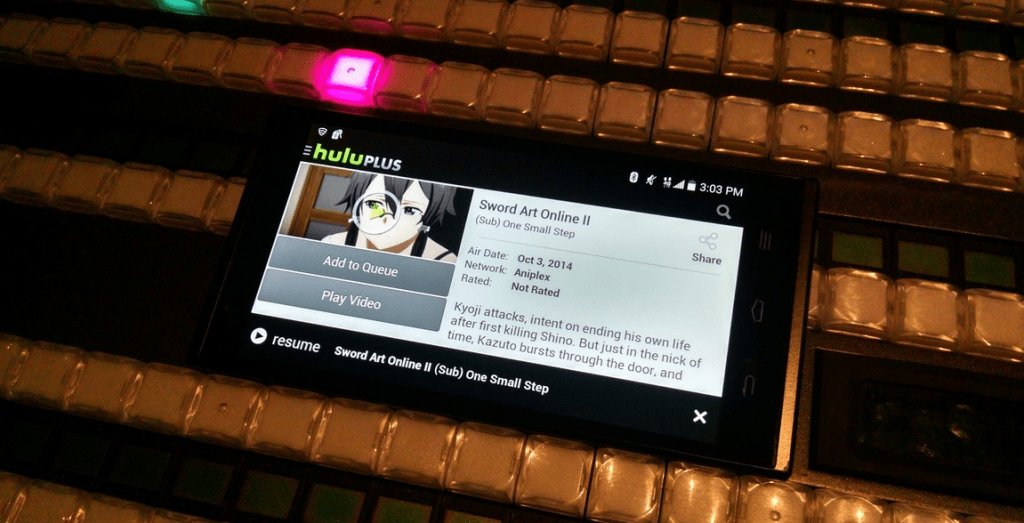 Although Hulu weirdly categorizes subbed and dubbed episodes of anime shows separately, the important part is that you do get the choice. Moreover, Hulu’s network subscription allows you to add Crunchyroll premium to your existing account so you get all of your favorite anime series, TV shows, and movies on a single platform.

The mobile version for one of the most popular anime streaming sites, FunimationNow isn't far from the top spot on this list. Unlike mainstream services like Hulu, Funimation does suffer from regional restrictions. But that's nothing that a good VPN can’t solve. There's a free (ad-filled) subscription, but the $5/month premium (ad-free) subscription will get you a bunch of exclusive content. 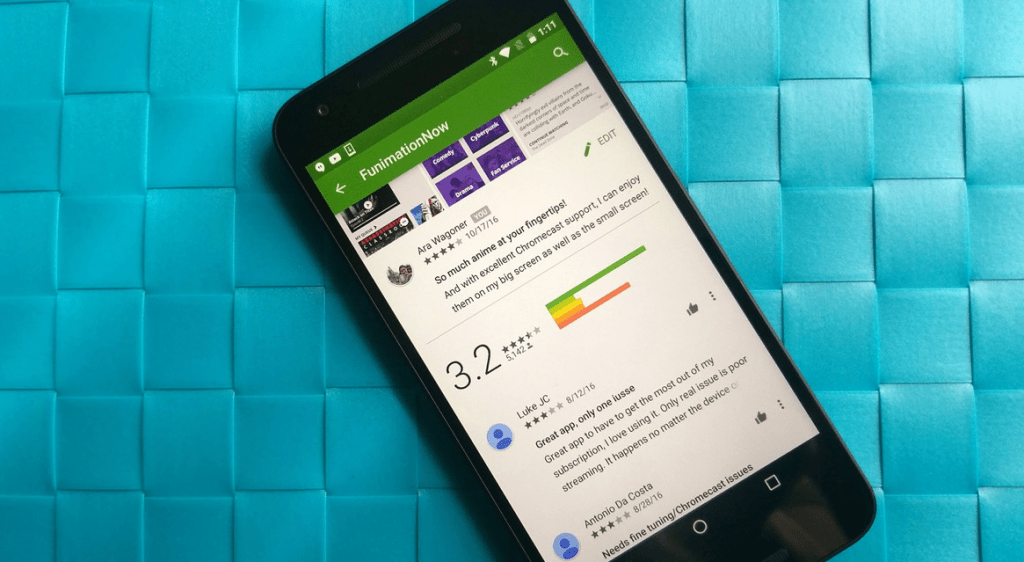 Funimation maintains a large catalog including old classics like Dragon Ball Z and Fairy Tail. There’s no shortage of newly released series either, although the dubbed versions take a few weeks to come out. The FunimationNow app sometimes feels like a work in progress, with some playback glitches every now and then, but features like Chromecast support make it worthwhile nonetheless.

If you ever wanted an IMDB made just for anime, Pocket MAL is the answer to all of your prayers. A community built by thousands of “otakus” like yourself, this app is a mobile version of MAL (MyAnimeList.net). Pocket MAL helps you keep track of the shows you’re watching, so you know every time a new episode comes out in Japan. 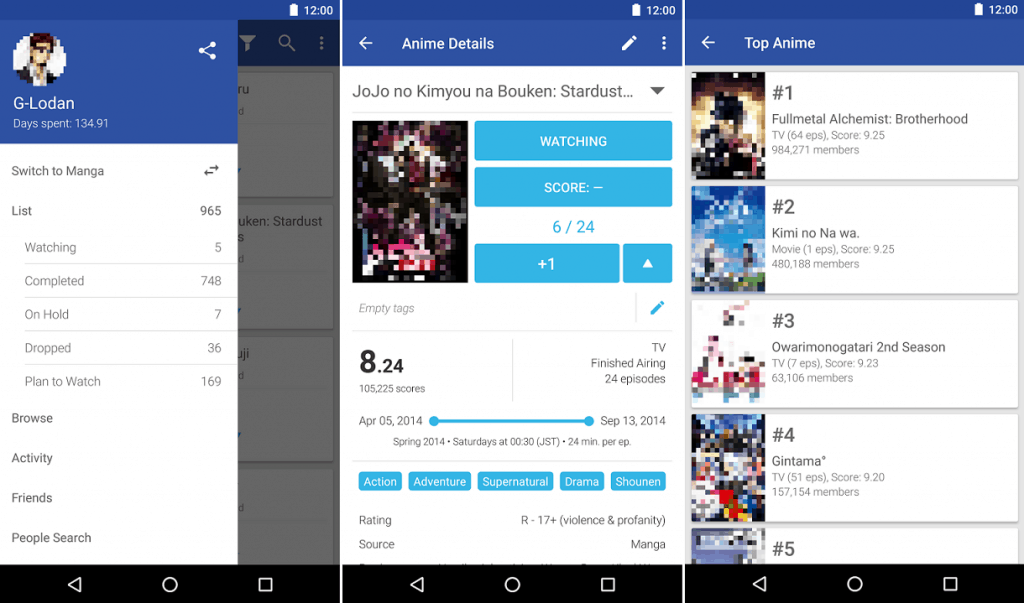 Pocket MAL helps you discover new anime titles with complete synopses and reviews from other users. There’s even community access for you to connect other anime fans who share your interests. Users have complained that the app does not give you full access to MAL, but it still beats heading over to your computer every time.

No veteran anime fan is going to be thoroughly impressed with the limited titles that Netflix offers. But that's not to say that it has nothing to offer. Unlike its biggest competitor Hulu, there’s no option to add subscriptions and make more anime shows available. But you don’t have to pay anything more than your original subscription plan for around 50 amine series and movies. 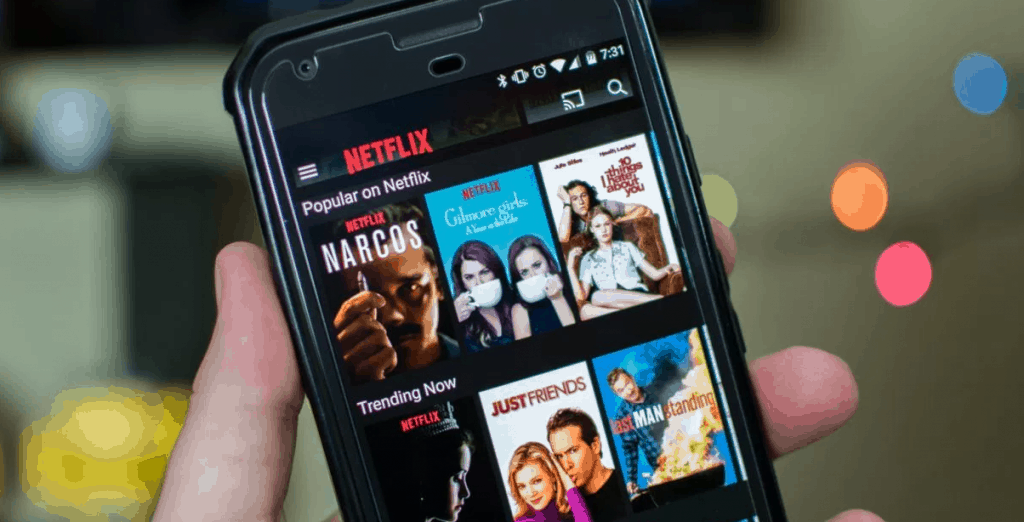 Netflix has already become a popular content creator with TV shows and movies like House of Cards and Stranger Things. The service also offers original anime series, such as Voltron and Seven Deadly Sins, which you can’t find anywhere else. Offering simulcast programming with the subbed version available within hours of release, Netflix is perfect for beginner anime fans.

In order to capitalize on the growing popularity of anime streaming sites, Amazon launched a premium service. Anime Strike just wasn’t popular enough among users who were asked to pay $5/month for it, which is why the service was discontinued last month. To everyone’s surprise, Amazon decided to migrate its anime content into Prime Video.

So now your Amazon Prime membership comes with the added benefit of hundreds of premium anime shows and movies. The massive lineup includes Inuyashiki Last Hero, Scum’s Wish, and Okkoku, with both dubbed and subbed versions. Although the service is not reliable for simulcast programming, it makes up for it with the size of the content library.For hardcore fans who follow each episode by the minute, only Funimation and Crunchyroll can cut it. But if you enjoy dubbed versions and don’t mind the wait time, mainstream services like Hulu, Netflix, and Amazon Prime Video are great for content that hasn't translated or subtitled.

For all the freeloaders out there, one of the few anime streaming sites that offers content for nothing is Viewster. The lightly ad-supported app is clean and well-designed, and fortunately, Viewster isn't region-restricted like other services on this list. 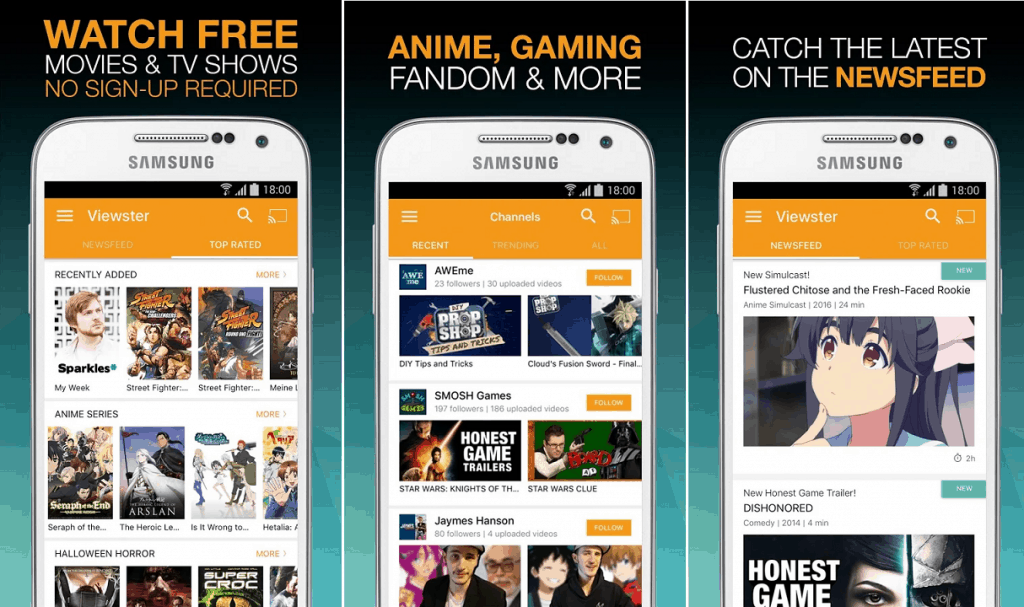 The catalog isn't that impressive, though, and we could find only a couple of recognizable titles available in English. Nonetheless, Viewster is probably the only truly free service to watch anime on your Android device, without being bombarded with ads every minute.

While there are a few apps on Google Play that are considered illegal to use, everything that we've mentioned in this article is completely legal. And that's precisely why for many of you, the available content there is rather limited.This applies to every anime app that's out there right now - including Crunchyroll. Which, in some ways, is the best app to watch anime on Android.One of the main reasons this happens is due to regional restrictions. The error message that you get when a show isn't available in your country usually looks like this: "Sorry, due to licensing limitations, videos are unavailable in your region."As the message the suggests, the issue lies in licensing. The actual explanation behind this is very complex. So, let us oversimplify it by saying that companies that hold digital rights for shows need to give licenses for each region. When a show isn't licensed in your region, you can't legally watch it.The main reason behind this is money. Profit. If every little company had a way of selling a show, the profits would have to be divided. But if there's only one, then they are going to receive all the profit.Of course, most of us are left with no way to even pay for our anime. There is often no way to legally watch shows. So, the end result is quite the opposite of what the publishers had intended.

The Best App to Watch Anime: Wrapping Up

As you've probably already noticed, finding the best app to watch Android isn't as simple as you may have originally thought. There are multiple variants in the equasion. Things like pricing, region restrictions, and more. So, take a look at our picks and choose whatever fits you best.That's all for now. If you think you have any better picks that we may have missed, feel free to let us know about them in the comments section down below! Same thing goes for questions or anything in-between.If you liked this article, feel free to follow us on Facebook or Twitter. We regularly post content about Android news, reviews, listicles, apps, games, devices, how-to guides, and more!