Google rolled out Android 8.0 all the way back in August 2017, and owners of anything other than a Pixel or Nexus have been waiting for it ever since. Samsung Galaxy S8 and S8+ users knew they wouldn't be early recipients, but the wait has still been excruciatingly long. Well, that wait finally ended last week, as Samsung began pushing Android 8.0 Oreo to the Galaxy S8.While many Galaxy fans will be focused on the launch of the Galaxy S9 on February 25, there’s still a lot to be excited about right now. This major Android version update brings all the goodness of Oreo that we’ve been salivating over for months. And since its Samsung, you get more than the run-of-the-mill stock Android user experience with the Oreo update.

Along with features like Picture-in-picture mode (PIP) and restricted background processes, there's plenty new in Google's vanilla version of Oreo. But we’re here to talk about what’s new for the Galaxy S8, and that includes its latest skin on top of Android – Samsung Experience 9.0 UX. You may be familiar with Samsung’s age-old user interface called TouchWiz, which saw a lot of criticism but was quite popular nonetheless.In a sea of Android OEMs where originality is rare, Samsung Experience 9.0 makes Galaxy S8 stand out. Samsung wants you to know all about all of its unique UX enhancements, so it has created a gigantic infographic about. We've pulled out the best bits for you.

At this point, few other keyboards come close to Google’s Gboard. But the redesign of the Samsung Keyboard that comes with the Oreo update is built to impress right away. If the standard color schemes are a little difficult to use, Samsung has added 4 high-contrast modes to make the keys easily distinguishable. 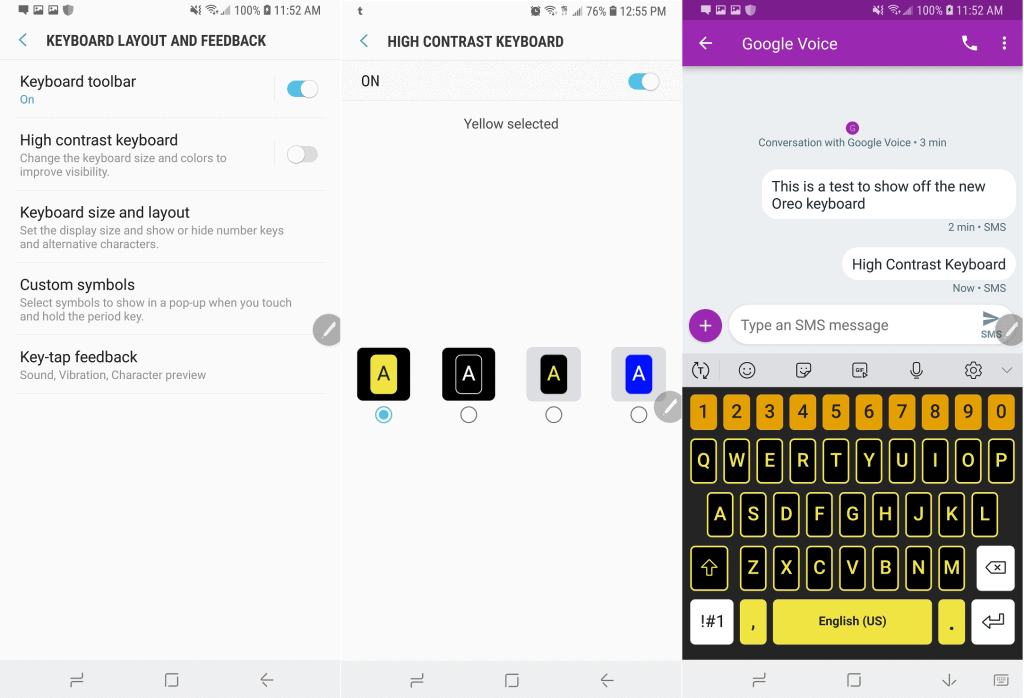 You can enable this feature by accessing Settings > Accessibility > Vision > High contrast keyboard.To keep your conversations interesting, you get features like GIFs support, improved Emoji 5.0, smarter predictive text and stickers. All of this is placed in a toolbar with voice support along with the ability to resize the keyboard layout.

Dual Messenger out of the box

Some may have wanted a way to use two social media or messenger accounts for the same app with your Galaxy S8 simultaneously. While the idea of cloning apps on Android is not entirely new, Samsung has made it much more convenient. Samsung’s Dual Messenger allows you to clone social apps, with the choice currently limited to Facebook, WhatsApp, and Facebook Messenger. 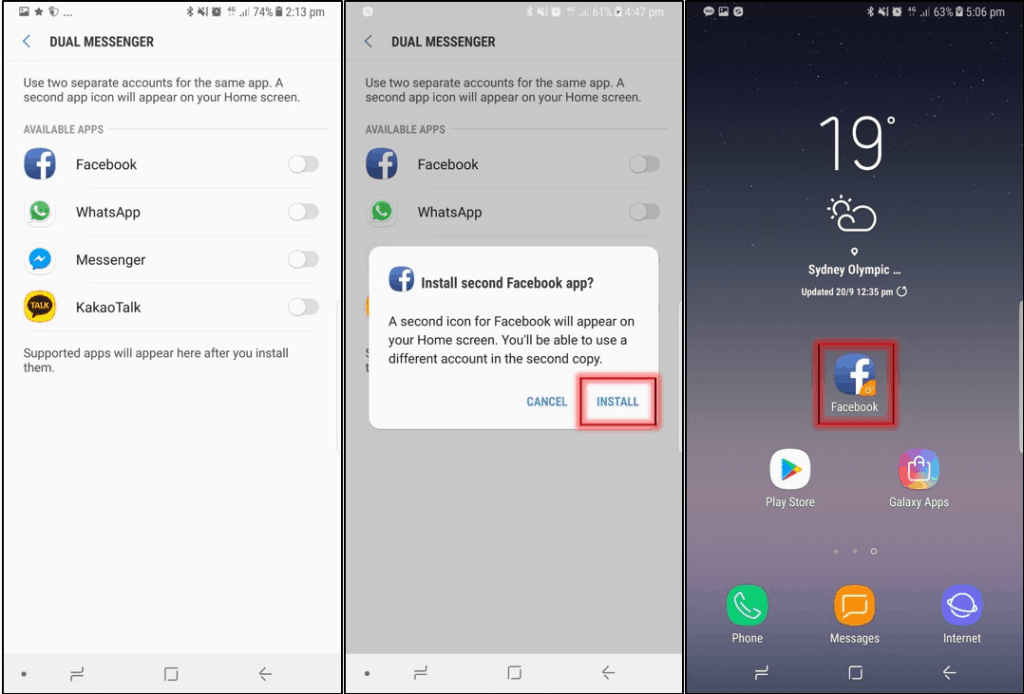 You can turn it on by heading to Settings > Advanced features > Dual Messenger. Once you enable it for a specific app, a shortcut of the cloned app will pop up on the screen with an orange label over the icon. The orange label is even included in the cloned app, so you'll hopefully never end up posting from the wrong account.

Google introduced the Night Light feature to filter out the blue hues back with the original Pixel. Samsung goes one step further with a feature called Color Lens, designed especially for users who find it harder to read on their Galaxy S8 with a white screen. 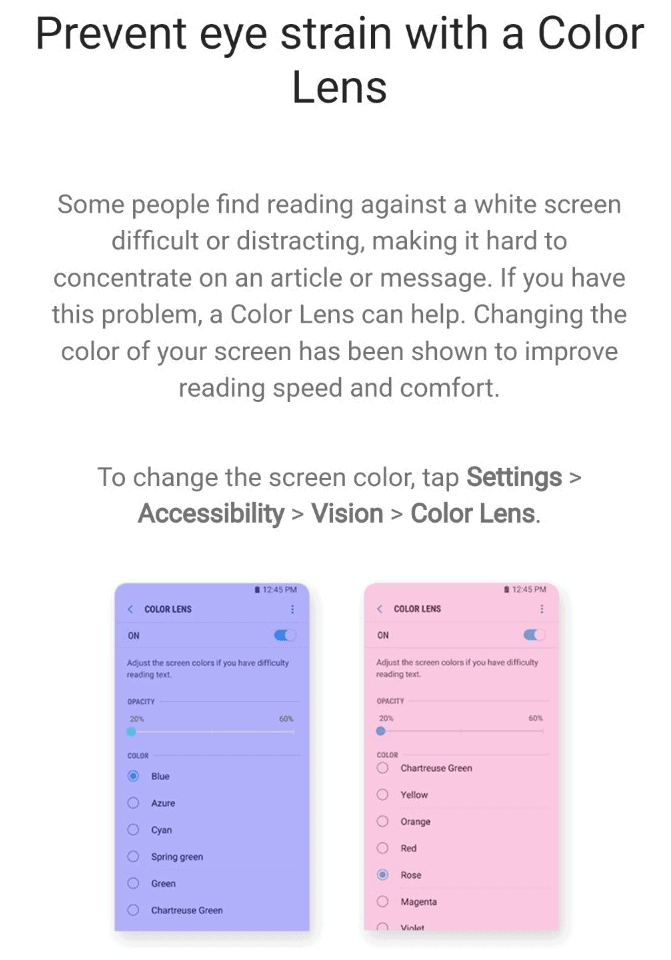 The Color Lens feature allows you to easily add a color filter to the entire display, which could be great for bibliophiles. Head over to Settings > Accessibility > Vision >Color Lens to enable the feature. You can then fine-tune the display with a multitude of different colors and shades, and even alter the opacity of the color scheme.

What’s the point of having the Galaxy S8 with an Infinity Display if you’re not showing off those curves? The Edge Lightning notification feature is made even more stunning with the Android 8.0 update, thanks to the new effects. Since you can see the edges light up even when faced down, this makes Edge Lighting even more useful.You now get four different Edge Lighting effects to choose from, which includes glow and rainbow effects. The customization doesn’t stop there, as you can choose the width and transparency of the Edge Lighting. You can do all of this by accessing Settings > Edge Screen > Edge Lighting.

Bixby Briefing to start your day

We’re not the biggest fan of Samsung’s personal assistant, and we certainly don’t always love the Flipboard Briefing. Samsung has infused the two to create the new Bixby Briefing, which might not be as bad as you’d expect it to be. This particular feature aims to give you contextual information about your day every time an alarm goes off on your Samsung Galaxy S8. 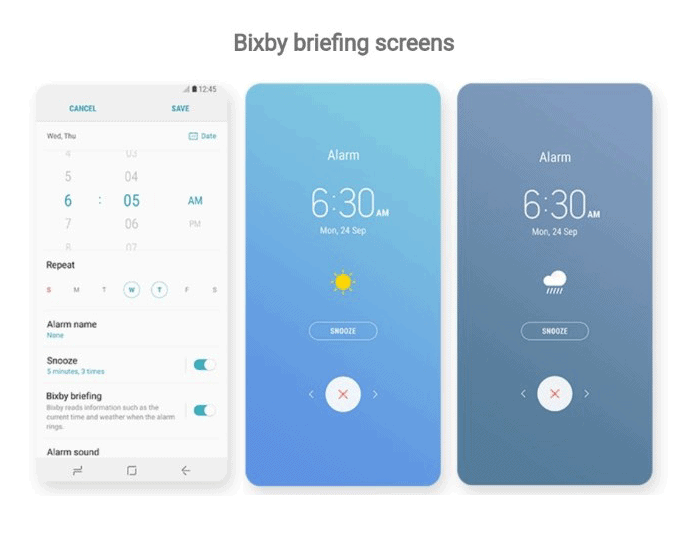 Bixby will now update you on the weather and some soothing background music every time an alarm goes off. Unlike Bixby itself, the feature isn’t enabled by default, but you can get it by heading over to Clock > Add > Bixby briefing.

Always On Display gets better

Adopting AMOLED technology early on has always given Samsung an advantage, especially with features like Always On Display. The Galaxy S8 with Samsung Experience 9.0 gets a reboot to the grayscale color scheme, along with tons of customization options. 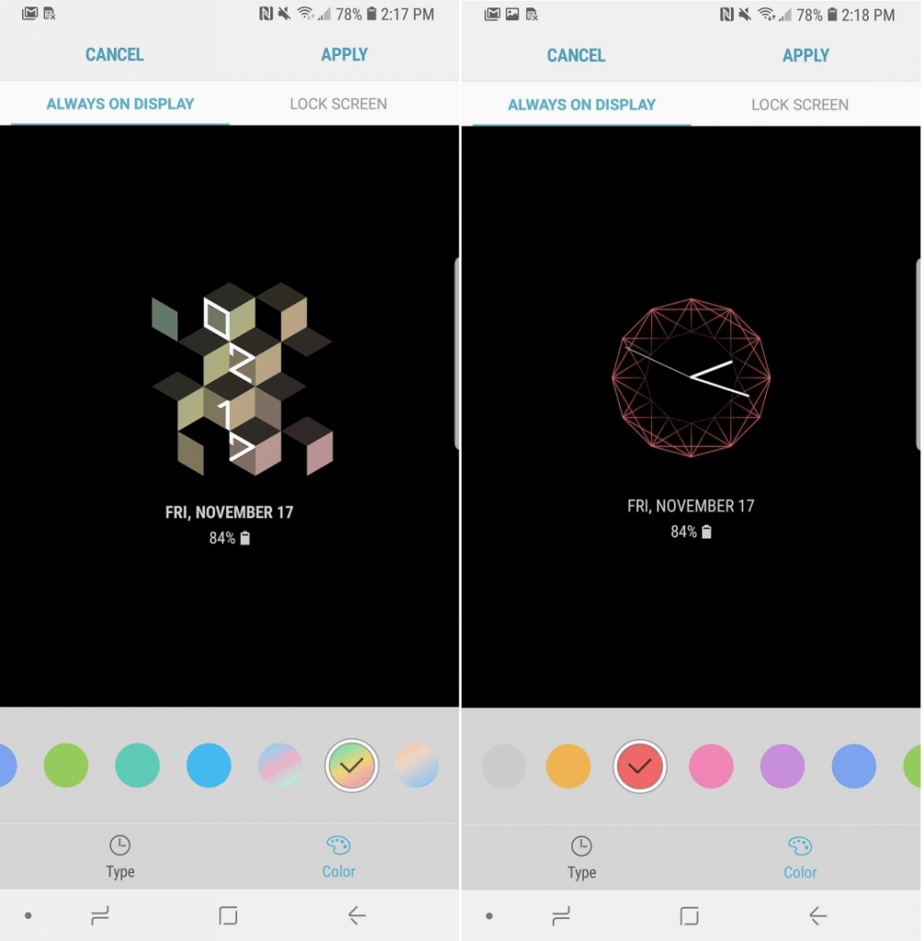 You now get a bunch of new clock layouts to choose from, along with a variety of color schemes. To make notifications and apps more accessible, Samsung has bundled in customizations for the lockscreen alongside AOD.

You might be content with the Gmail app, but the updated Samsung Email wants to change your mind. The latest set of features added to the app are directed towards productivity with a bunch of “due date” options.

Simply swipe an email and from the options available, tap on the “Due date” button, set a date and time and hit “Done”. The due date option for email also comes with a snooze button, so you'll never miss an important task.

Google may be the undisputed king when it comes to search, but Samsung does bring something new to the table in Experience 9.0. Making your on-device search results faster and more relevant, the Search menu on the default launcher now comes with an iPhone-esque semi-transparent background. 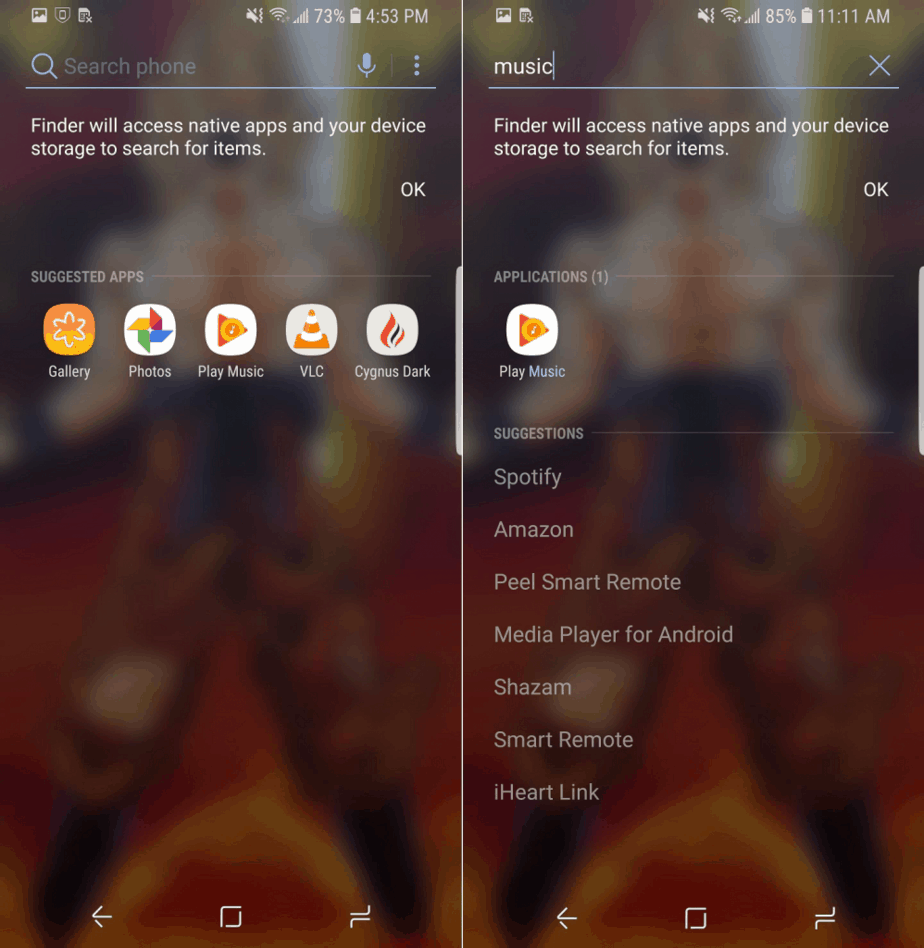 The app relevant to the term that you’ve searched will show up first on the screen, with suggestions listed right below. For instance, if you search for “music”, the first result to show up will be your default music app, with related keywords and apps underneath. Search results are now sourced not just from the internet, but also from the Google Play Store and Galaxy Apps.

Turning your Galaxy device into a full-fledged desktop with the Samsung DeX docking system is a pretty cool concept. With the Oreo update on the Galaxy S8, the desktop experience gets visual improvements with the addition of Full-HD and Ultra-HD support for high-resolution monitors. 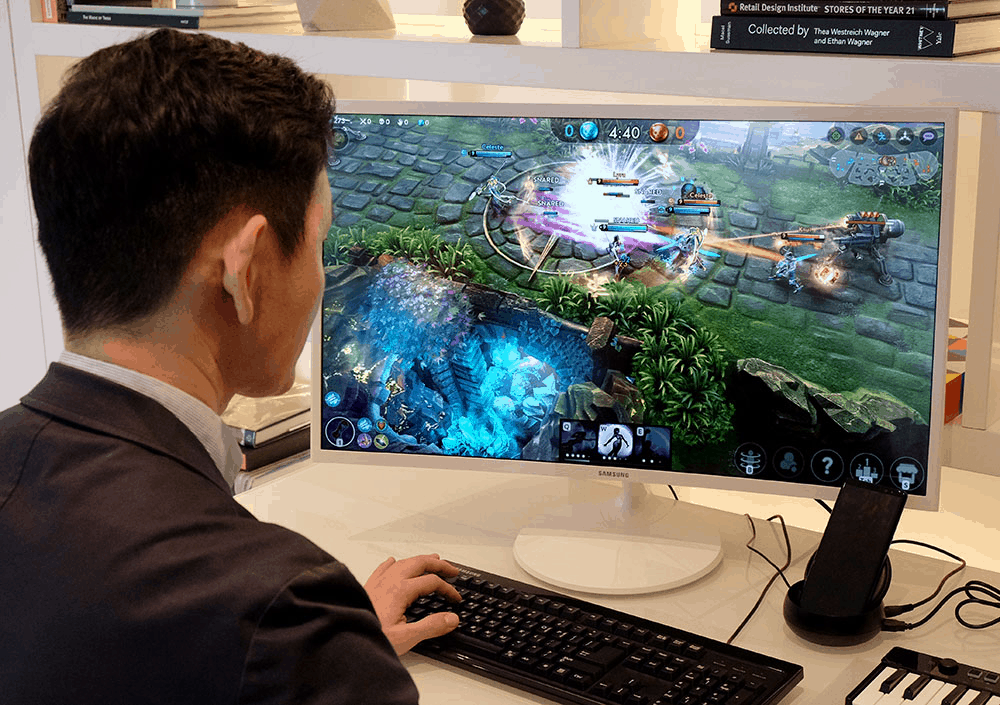 You can easily set the preferred screen resolution by heading over to Settings > Screen resolution for Samsung DeX. Mobile gaming on the big screen is made even sweeter with the Game Launcher, which comes with keyboard and mouse mapping options built right into the system.

Thanks to Android Oreo, you can now make the most out of app shortcuts to perform functions directly from the home screen. Samsung adds a splash of color by helping you color coordinate all of your apps with folders on your home screen. 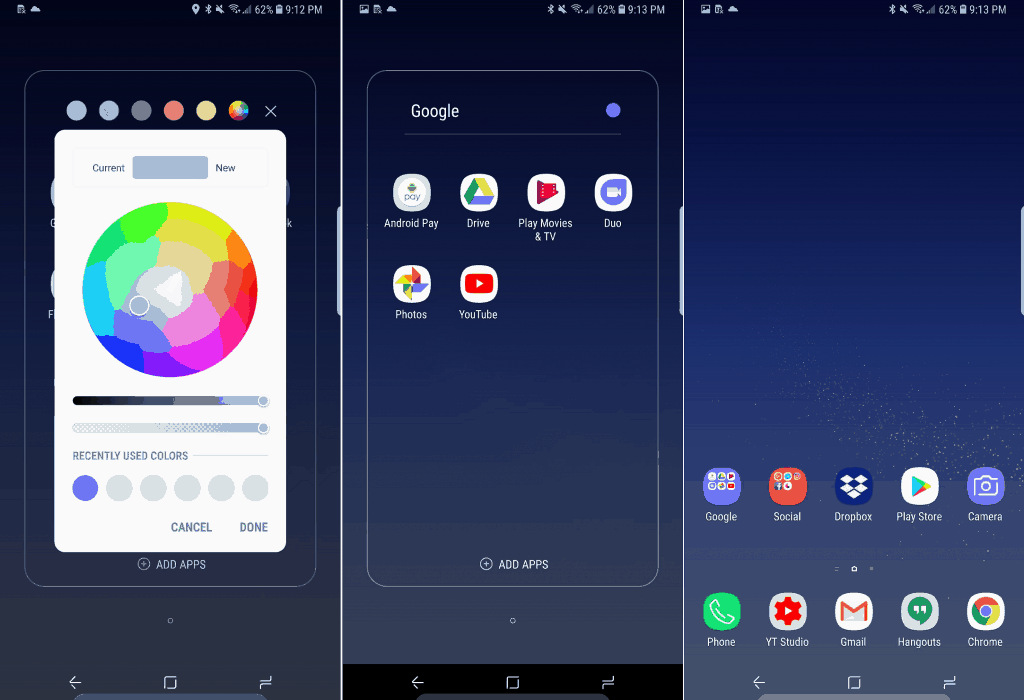 This specific feature is limited to the theme that you’ve applied to your Galaxy S8. For instance, you can only choose darker color shades for the app folders when the theme is set to black.It is refreshing to try out a flavor of Android 8.0 that offers useful improvements over the stock experience. One disappointment with the Galaxy S8 Oreo update is that it's missing support for Project Treble. Even so, Samsung Experience 9.0 makes the long wait for the firmware update almost worth it.What are your thoughts about the Galaxy S8 Oreo update and the new features that it brings? Let us know what your favorite new feature on the Galaxy S8 is down in the comments below.