The Galaxy S9 and Galaxy S9+ have been on sale for a few weeks now, so attention naturally turns to the next flagship Samsung has in store, the Galaxy Note 9. A few rumors have surfaced surrounding the device already, including the speculation that the device will be released earlier than anticipated.Don't Miss: How to take a screenshot on the Samsung Galaxy S9/S9+Making the rounds in the news blog sphere are leaked images that claim to be the Galaxy Note 9 and show the distinct lack of a fingerprint sensor on the rear. This led to the conclusion that Samsung has cracked the technology needed to embed a fingerprint sensor under the display. Making a move to an integrated fingerprint sensor has been rumored for some time, and there was speculation it may make an appearance in the Galaxy S9/S9+. Reportedly, Samsung couldn't perfect the technology in time so pulled the design and opted for the more traditional rear mounted sensor. Seeing the technology being lined up for the Galaxy Note 9 consequently makes total sense, if the images were real. 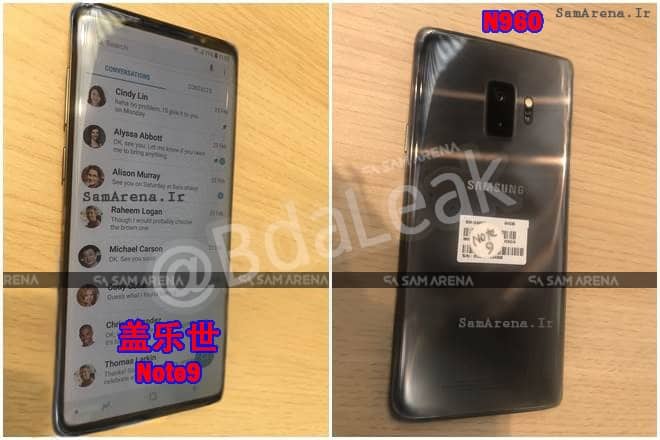 The supposed leaked image of the Galaxy Note 9 you see above is nothing more than a photoshopped Galaxy S9. SamMobile uncovered this by simply doing a reverse Google Image search to find the images were taken from various S9 hands-on articles. Unfortunately, anyone with hopes for an early glimpse at the Galaxy Note 9 will have to wait a little longer. It's still incredibly early to see any real prototypes at this stage beyond perhaps a few mockups.There is also every chance that Samsung does not have anything special planned for the Note 9 beyond what we saw on the S9 and S9+ and will release an evolutionary update to the Note line rather than revolutionary.As the reported launch date approaches later this year, no doubt more details will leak out and give a better indication as to what to expect from the device. Until then, keep your eyes peeled for the latest updates on the Galaxy Note 9 here at Updato.