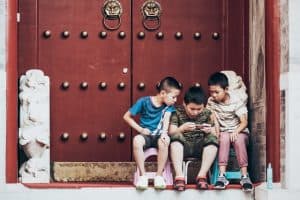 The generation Z is exposed to a lot of dangers and one of them is a mobile phone. However, its benefits can’t be denied but also its threats can’t be eluded.Even the youngest members of a family as young as 7 years own their mobile phone. Now a mobile phone in today's age is just not a communication device rather it is a pocket-sized tool that has almost all features of a computer, even a few more.Hence when a parent today hand over a phone to a child they should be aware of dangers they are opening up their child to:

It is a topic widely spoken of and researched upon. It is a reality in today's world, although both adults and children are exposed to radioactive waves of a mobile phone. Children are highly affected ones.  Their system as compared to adults is still developing and more vulnerable to these radioactive waves. Mobile phone waves have been identified as a cause of the development of non-malignant tumors in ears and brain and cancer.

Mobile phone screens are addictive and along with that the games and social media can lure children easily towards them. Hence when a child has access to a mobile phone they tend to lose their focus on studies. Students have often been found using mobile phones in   class to text fellow students

A mobile phone has granted access to the internet. The Internet has all sorts of information on it and there are definite chances that your child might be exposed to content you don't want them to be. The inappropriate content at this age when they are highly impressionable can cause long term negative effects. A new phenomenon has emerged that is teens sending inappropriate messages and pictures without realizing the harmful effects it could cause them in the future.

The mobile phone introduces a child to a whole new virtual world and often children forget to live in the real world and they start relying on the virtual world. This stops them from developing social skills and they end up being anti-social. Also, games are manipulative leading the children to get addicted to them. You can see their effect in cases like children having anxiety attacks because their phone was taken away from them or children getting heart attacks because they lost a rc cars game. Hence the mobile phones have deep-rooted effects on the mental health of children

How can you save your children?

Now banning your child from having any access to mobile phones just because they might be ways harm is no solution because eventually they will find access and you having no knowledge of this is more harmful.Here are a few ways in which you can ensure your child’s safety