The original Angry Birds that first came out in 2009 is one of the biggest and most popular games to ever come out. It's been a while since Angry Birds 2 came out. So, how does it measure compared to the legend? Well, let's find out!

https://www.youtube.com/watch?v=M0niPfYZaaIThe main concept is the same old recipe. The hungry piggies steal the eggs of our birds and the now angry birds need to get those eggs back from the piggies.This keeps on happening time and time again and it basically seems to be a never-ending loop in the Angry Birds universe. After all, if it ended, then Angry Birds wouldn't really feel like Angry Birds, right?

The core gameplay is also more or less the same, but with a few new additions. First of all, we now have a couple of new birds with new powers. Though, to be honest, one of them seems like a very similar version of the green bird but whatever.Other than that, it goes without saying that we've got brand new level designs. Now there are actually multiple stages per level. So, do keep that in mind. And let's not forget about the spells as well. You use spells to freeze, burn, or even enlarge the piggies. 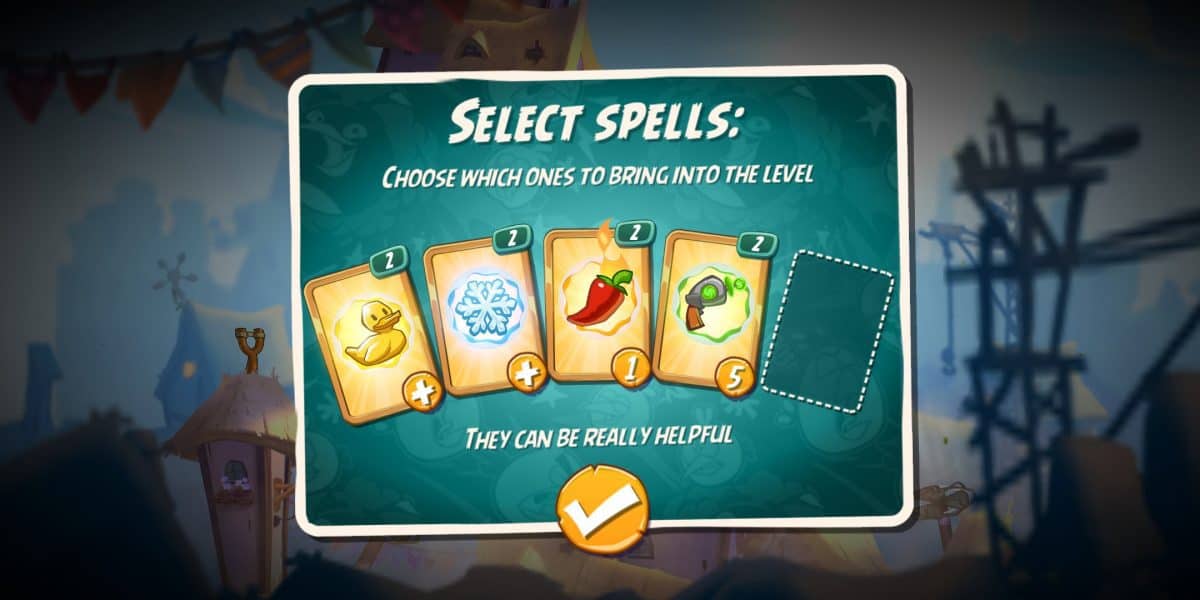 You can get these spells either by daily rewards and stuff like that or by paying real money for them. And if paying real-money just for spells annoys you, well, just you wait cause we're only getting started. There'll be more where that came from later on.Moving on with the actual gameplay, one massive overhaul is the way that you'll be using the birds. With the old system, the birds were placed on a very specific order and you had to use them in that order.Now you get a bit more freedom. While after a certain point all birds become available, you can commonly only choose between three birds or two birds and one power up. Though, various random combinations can occur so do keep that in mind as well.Still, the fact that you can choose freely between what bird to use makes things more interesting for sure. That and there also a few new additions on level design such as portals and stuff like that.Last, but not least, we now also have boss battles. Those are not too different from your average level, though. The main differences are that it's raining and that the boss has a life gauge - which means that you may have to hit him multiple times to take him down. 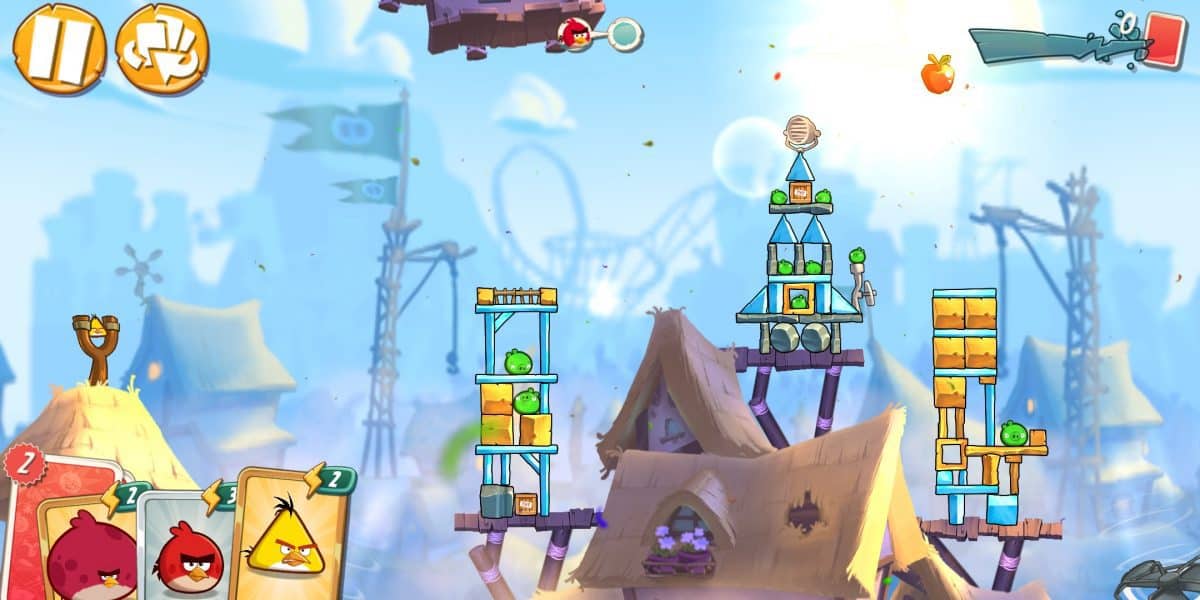 The graphics of Angry Birds 2 are still more or less the same with the original piece. There have been minor improvements for sure but nothing that will blow you away.Though, some of the new fluid animations are definitely cool and give a breath of fresh air to the game. For an example, when you start aiming with your bird you get a mini screen on the upper left part of your display which shows the reaction of your bird and the pig.Also, there are times where if the pigs get hit they just fly over your screen and it's pretty hilarious to watch. Furthermore, the super smooth animations between gameplay and level selection somehow make the game even better.As for optimization, we're really not sure on what to so say about it. The game doesn't seem to be that heavy on the graphics but it most certainly stutters every now and then. That's on a phone that uses a Snapdragon 636 device which is neither too powerful or too weak.Our best bet is that the physics of the game are somewhat demanding. After all, there is a lot of stuff going on in a somewhat large map. Speaking of which, the average stage on Angry Birds 2 seems to be much bigger compared to what its predecessor had.The controls are the exact same thing. You simply aim, shoot, and then you can press anywhere on the screen to activate the special power of your bird. 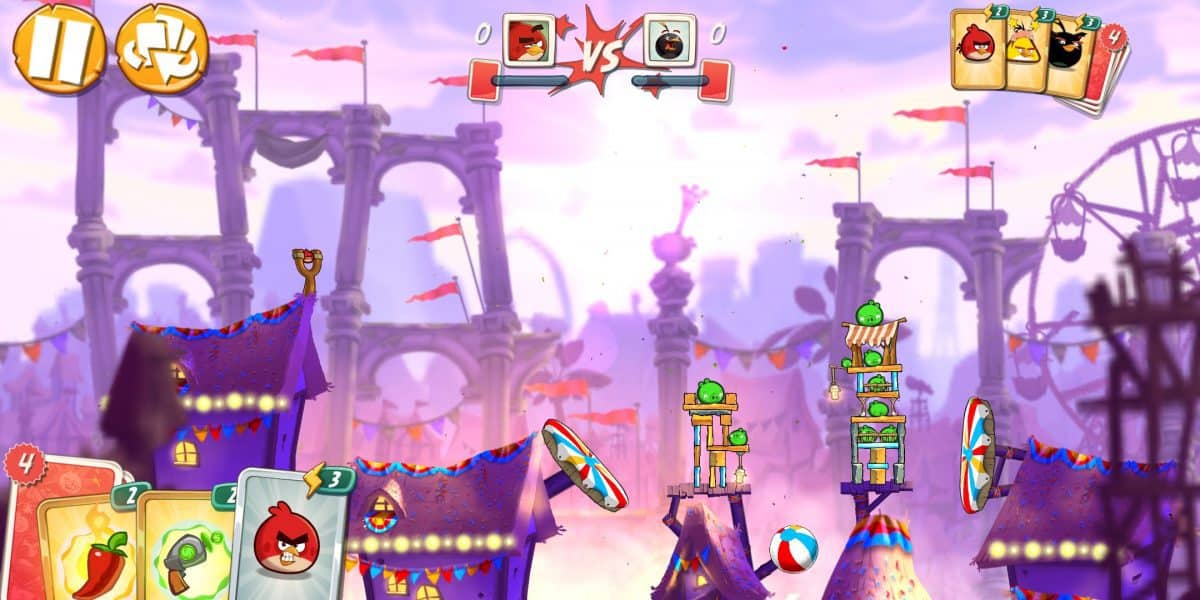 In the original Angry Birds game, you only had the ability to play offline; aka single player mode. Now, you also have the choice of playing against other people online.The concept is simple. Both you and your opponent are being placed on the same levels and the one who gets the highest score will be the winner.If you want our honest opinion, these players and even their names don't feel like real people. We often get the impression that we're being placed against bots or something like that.Why? Mostly because the vast majority of them are way too easy to beat and also because their names are way too perfect if that makes sense.Usually, online names are something like therocketlauncher254 or something along these lines. Angry Birds 2 players, on the other hand, have names like Rocket Launcher. Way too perfect and smooth.But, what do we know? It could be that all Angry Birds 2 players are actually using perfect names. It's a chance. 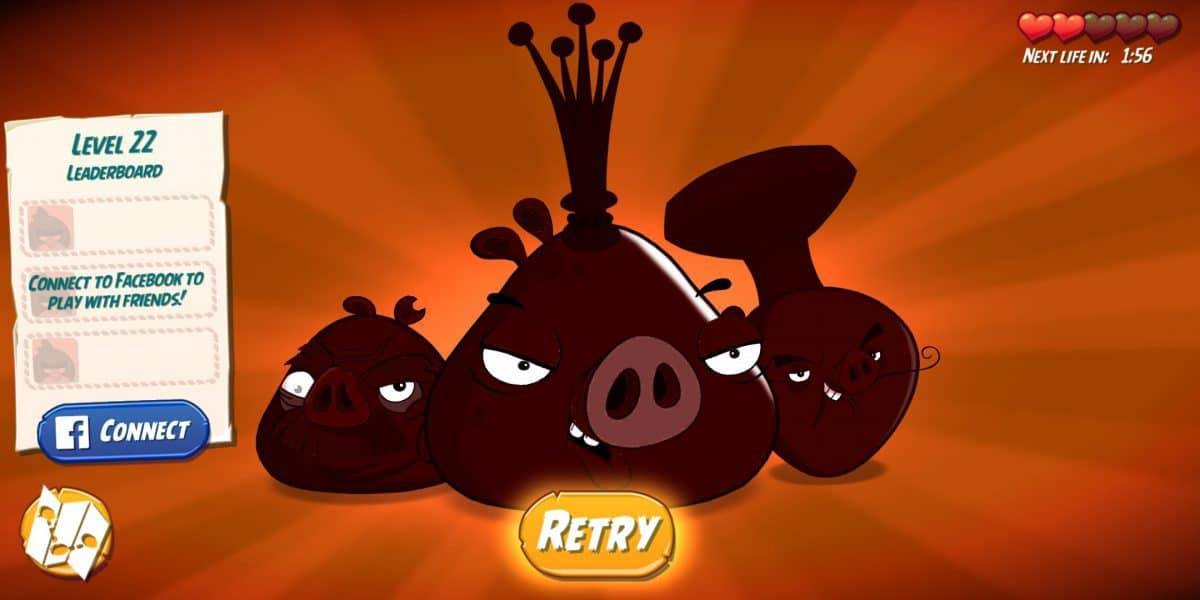 You see these hearts on the upper right corner of the screen? Yeah, that's right. There is a limit to how many times you can lose to a level before having to wait for a cooldown in order to play again.This is only one of the many paywalls that Angry Birds 2 has. Rovio is literally looking for numerous ways to extort money from its players and sometimes it gets a little bit annoying.Feathers to level up, mini-games, PVP, spells, apples for your level up bird, reward chests, etc. For every second step you take, you'll be greeted with the proposal of either watching a video or paying real money for something.And to be fair, it's not just Rovio with Angry Birds. The vast majority of mobile games nowadays are trying to extort money from its players with various methods like those that we mentioned above.It's not a massive deal breaker. But, sometimes it definitely gets a little bit annoying and we had to mention it.

Is it better than the legend?

Angry Birds 2 is definitely a step above the original game. The new level design, fluid animations, and the PVP mode are some of the most important aspects that make it different and somewhat better.The numerous paywalls do make for some annoying moments. But, as we mentioned above, nothing that's a massive deal breaker. That's all for now!Feel like we forgot something important? Got something wrong? Then let us and everyone else know about it in the comments section down below!Like what you see? Then don't forget to share this article and follow us on Facebook and Twitter for the latest news, reviews, listicles, apps, games, devices, how-to guides, and more!