Do you like flying from building to building at 250 miles an hour? Or maybe you prefer racing on tracks where perfection is almost a requirement just so you won't finish last? No matter what your idea of fun is, racing games are just awesome. Here are what we consider to be some of the best racing games for Android!

https://youtu.be/1Xti1oCyMGcAsphalt has been of the most famous racing titles in mobile gaming for more than a decade now. You can hardly go wrong with it.Sure, it's not the most realistic racing game that you'll find. But, do you really need realism to have fun? More than 5 million people most certainly don't.Fly through landscapes and buildings, smash your opponents, and drift like your life depends on it. That's basically Asphalt in a nutshell.At least that's the standard version of Asphalt. There's also Asphalt Xtreme which is a bit more of an off-road experience and Asphalt Street Storm which is about drag racing.At the moment, Asphalt 9 on the Play Store has more than 460,000 ratings and averages a rating of 4.6/5. If you consider that the negative reviews are more about performance issues and bugs rather than the game itself, then you can see just how much of an overwhelmingly positive response this game is getting.While we are at the topic of performance - don't blame a game because it doesn't perform well on your device. Sure, optimization may be to blame. But, more often than not, the issue is with the smartphone and not with the game.We believe that Asphalt 9 is one of the best racing games for Android that you can get at this moment. It's free to play. So, you can go ahead and try it if you haven't already!

Get Asphalt 9 from the Google Play Store

https://youtu.be/--CQ0nO10kQOne does not simply mention Android racing games without bringing Real Racing 3 to the table. It was created 5 years ago by the gaming giant that's called EA and is still receiving updates to this day every now and then.Unlike Asphalt, Real Racing 3 is more, well, realistic. Instead of flying through landscapes and smashing your opponents, you actually need to stay on the ground and avoid hitting your competitors.The above statements may make you think that this is a dull game. But, it's really not. There is much more detail to it compared to Asphalt.You can't just press the brake button and drift through the corner with ease as you do on Asphalt. You need to have the correct speed and racing line or you'll end up either crashing or off stage.With that being said, while Real Racing 3 is indeed a bit more realistic than your average arcade game, it's by no means a racing simulator. Don't expect to get the Asseto Corsa experience through your phone just yet.One thing that's very close to reality, though, are the stages in this game. You'll find 19 real-world racing tracks with Monza and Laguna Seca being two of the most famous ones!With more than 5 million ratings and an average overall rating of 4.5/5, you can easily see why we picked this as one of the best racing games for Android. It's free so do give it a try.

Get Real Racing 3 from the Google Play Store

GT Racing 2 is one more game which focuses on being a bit more realistic rather than arcade. The big difference between this one and Real Racing 3 are the stages and cars.Gameloft says that this is a racing simulator. This is clearly NOT the case. 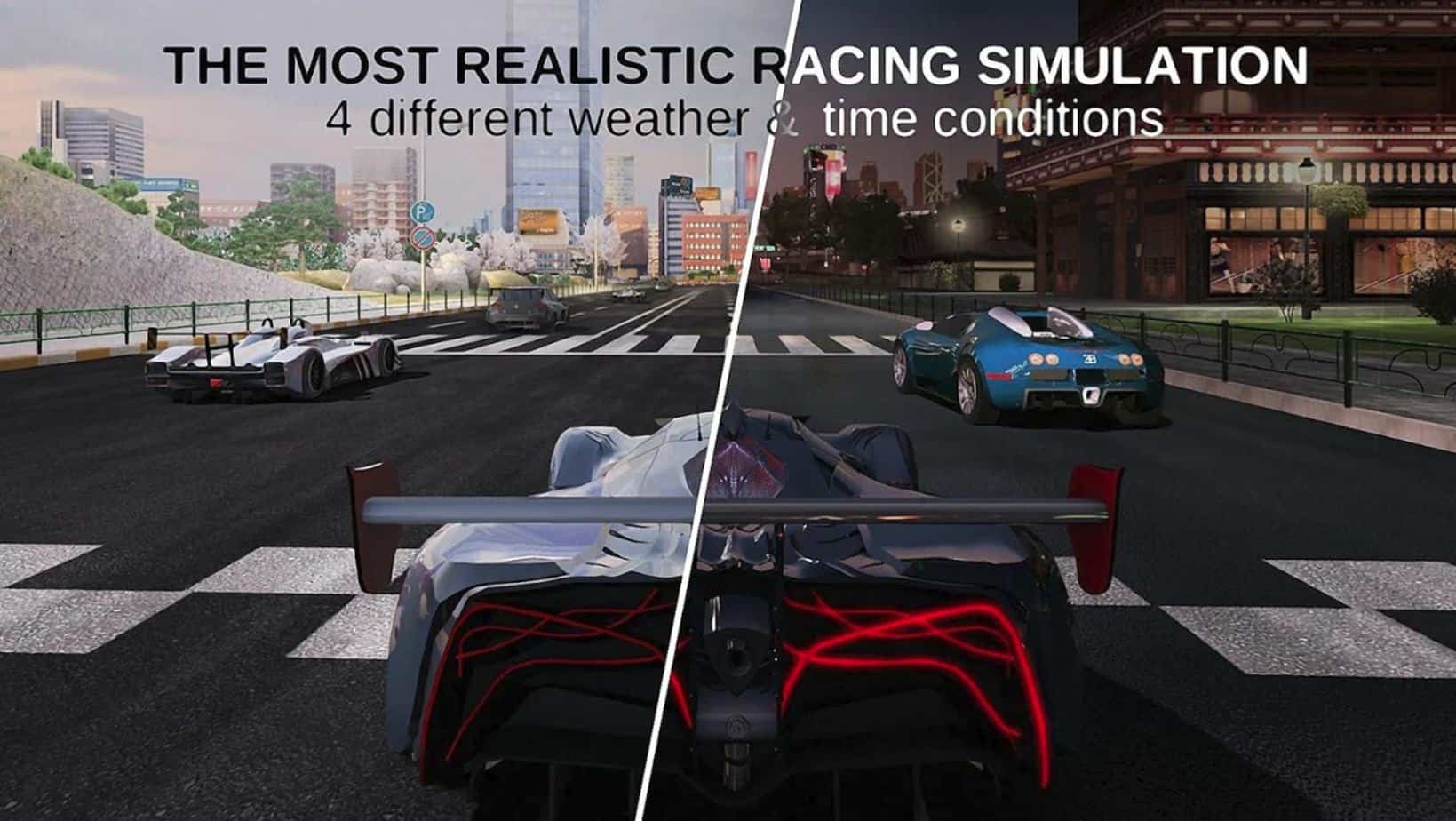 Real cars don't handle like that and they are most certainly not that easy to control. So, we're sorry to say that all these claims about games like this one being simulators with console grade graphics are mostly bad marketing.Don't get us wrong. We still obviously love this game and that's why we picked it as one of the best racing games for Android. We just had to clarify that no game on this list has console grade graphics or simulator physics like these gaming companies mention.Back to the matter at hand. GT Racing 2 looks just as good as its competitors but it's somehow performing much better and that's a good thing for budget/mid-range users.There is a lot of content that will keep you busy for a while here. To be more precise, 71 cars and 13 tracks. Don't let the small number of tracks fool you - each one of them takes quite some time to master.A small complaint that we have from both GT Racing 2 and Real Racing 3 is the upgrade times. Every time that you want to upgrade your car you'll have to wait for a while until the upgrade gets installed and the only easy way to bypass that is using real money.We understand that free to play games need to earn money as well. But, why not do it with purely cosmetical items that do not impact the core gameplay?

Get GT Racing 2 from the Google Play Store

https://youtu.be/qMW1zSxxiTECSR is known as one of the best drag racing games for Android. It is a little bit heavy on the system requirements but it offers breathtaking graphics in exchange.And now you may ask: "Isn't drag racing just running on a straight line? Where's the fun in that? No steering? No braking? For real?".Well, drag racing is all about timing and tuning. The one who understands his car best and knows when to shift will be the one to win.CSR is very easy to learn but hard to master and can offer a nice experience to both casual and competitive players. That's unless you don't like the concept of drag racing, of course.Speaking about preferences, CSR really seems to be a game that you either love or hate. It's hard to find a middle ground with such games. Still, we feel like it deserves a place in the list of best racing games for Android.Why not give it a try? It currently has more than 3 million ratings with an average rating of 4.7/5 which is pretty darn impressive.

Get CSR Racing 2 from the Google Play Store

5: Need for Speed No Limits

https://youtu.be/SvFB79hV2hMNeed for Speed is one of the most popular arcade racing titles of all time with Underground and Most Wanted being two of the most famous titles among the bunch. No Limits brings the whole Need for Speed experience to the smartphone gaming world and you know what? It's not half bad.Again, it's not the same with consoles, but it's still enjoyable. In Need for Speed, you are not only going to be racing but also running away from the police.Other than that, the map is kinda big, the graphics look beautiful, there are a lot of great customizable cars, the sound is gorgeous, what else could you possibly want? It's truly a nice game and it certainly deserves a spot on our list of the best racing games for Android.At the moment, it has 3 and a half million ratings and an average rating of 4.4/5. Check it out.

Get Need for Speed No Limits from the Google Play Store

Do you think that there is another game that's worthy of being on this list? If so, then please let us and everyone else know about it in the comments section down below!Like what you see? Then don't forget to follow us on Facebook and Twitter for the latest news, reviews, listicles, games, devices, apps, and more!