Poweramp is potentially the best music player for Android that we've ever seen. It offers a whole bunch of features, lots of skins/themes, support for multiple audio formats, and the best equalizer that we've ever tried on a smartphone.Interested in learning more about it? Keep on reading then! 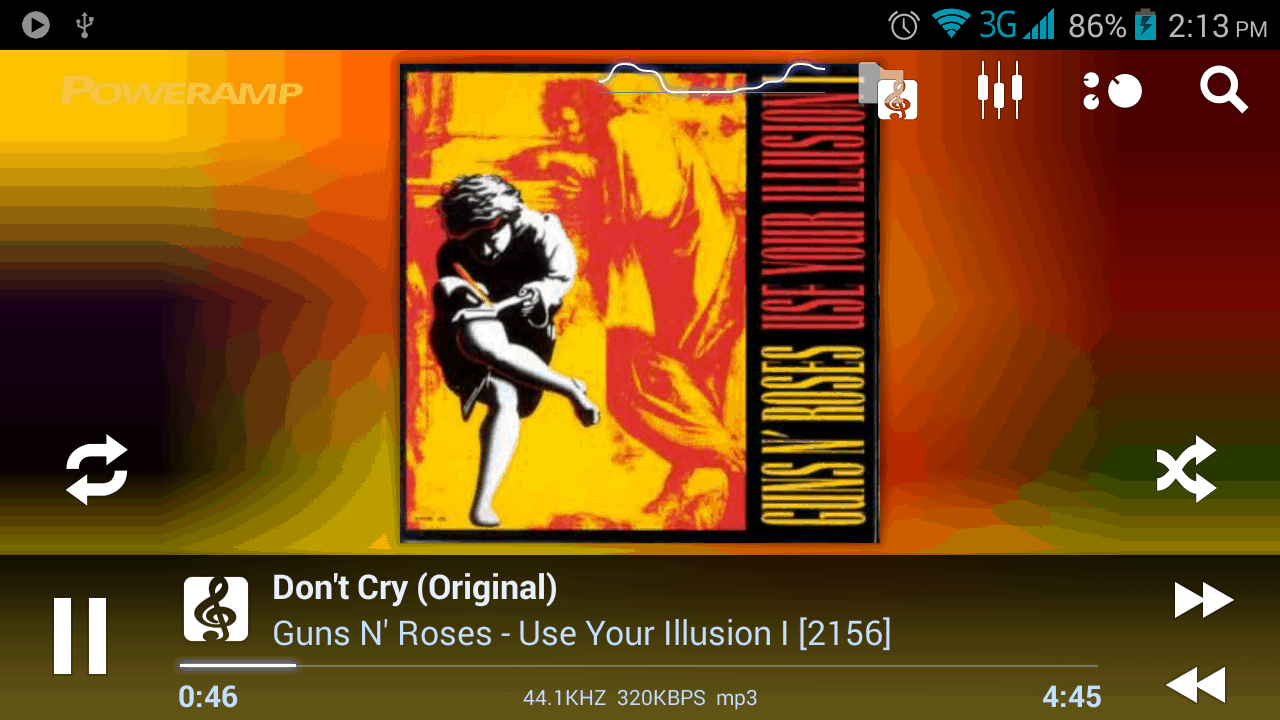 Poweramp feels very easy to use and navigate through without being too boring and shallow. On the other hand, it also doesn't look too fancy. All in all, one could say that style-wise, it keeps a fine balance.If the whole look doesn't fit your taste, then you can check out the various different themes that are available for it and you're sure to find something for you. But, more on that later.The one and only thing that immediately annoyed us is how this music player picks up every single sound format that there is on your phone. Every - single - one of them. That can be troublesome in certain *cough* porn *cough* cases.Of course, you can easily avoid that simply by adjusting the settings. There is the option of choosing what folders will be scanned for music which can help a lot when it comes to avoiding sounds that aren't exactly songs. Such as... sound effects from games.On the flip side of things, it's really awesome how you can navigate through the biggest part of the music player only through the screen that you can see on the top. Almost everything is there except for the settings. Like, the library, the equalizer, the shuffle or repeat buttons, simply awesome.Overall, if you can make the exception for the audio format problem that we mentioned above, then first impressions are good. 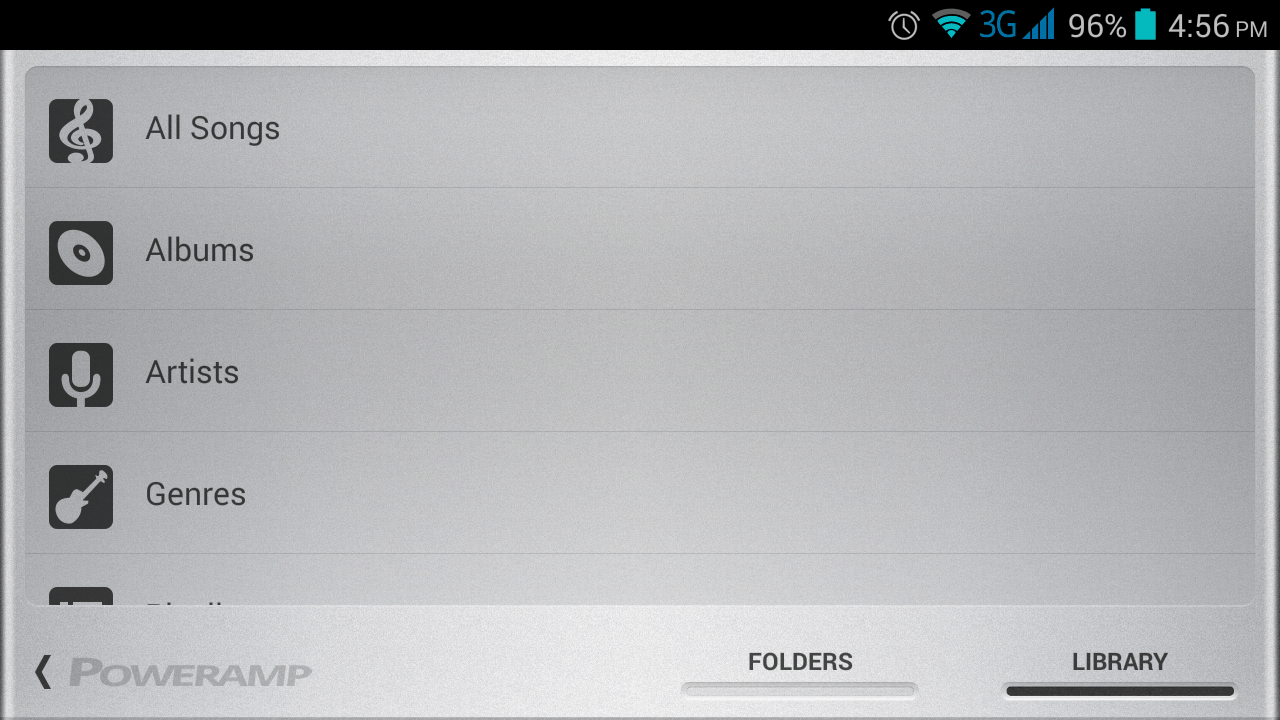 Poweramp gives you the option of using a plethora of different themes. Those can change the feel and look of this music player to a point where it almost seems like a different app.The list of available themes is so freaking long. Chances are that you'll find something to your taste. In fact, it would be amazing if you didn't like a single one of the available themes. And that list is still growing.Some themes are free while others are paid. Still, even the paid ones cost about a euro in my country and the average person doesn't use more than two or three themes at the same time.The skin/theme that you can see above is Aluminum HD and you can get it for free with Poweramp. If you're all about installing themes to your music player, then you can check out some of the available themes for Poweramp by clicking the link down below.

Get skins for Poweramp 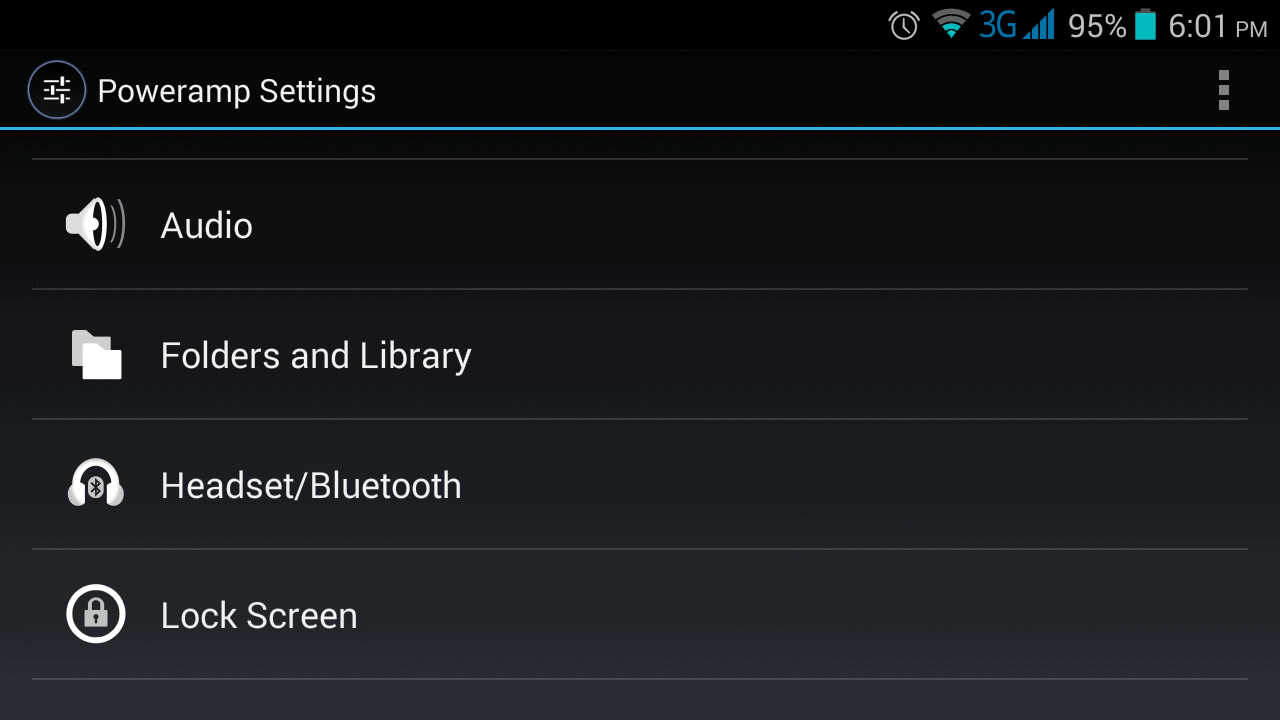 When it comes to features, there is a whole list of them to be made. Let's mention a few of the most important ones: We particularly loved the equalizer and the fact that this music player supports the flac audio format. After all, it's one of the very few formats that offers lossless audio playback.Customization options allow you to do pretty much everything from adjusting how the audio fade and crossfade works to headset options and themes that you can install. Speaking of headset options, we've been using a Bluetooth headset with Poweramp for the past few months and the headset control buttons seem to work flawlessly.There's one thing that we especially loved and that's the equalizer. Let's take a deeper look into it. 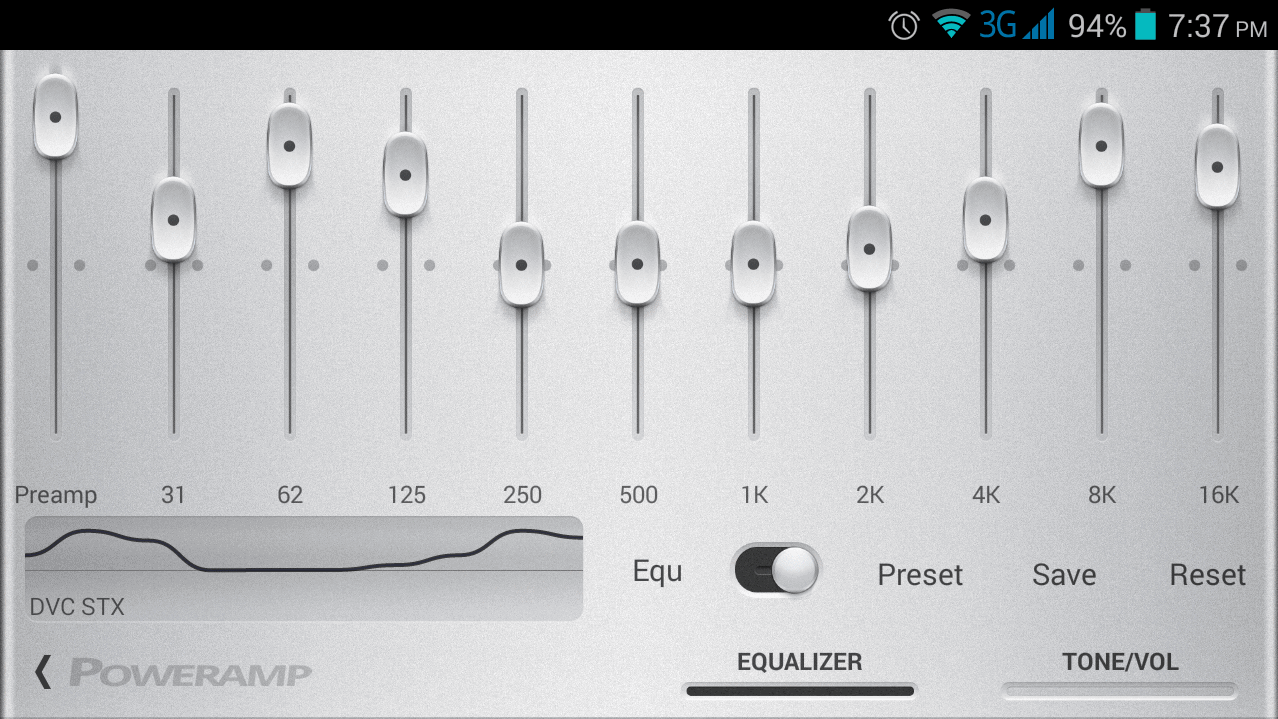 This is what separates Poweramp from any other music player. The audio quality and the equalizer that this app offers are simply out of this world. We've never seen anything like it on an Android device.Now, obviously, there are other apps that feature an equalizer plus bass and tremble customization support. That's nothing new. What's special in Poweramp, is how its equalizer affects the sound quality.We've tried numerous music players and nothing came close to the sound quality that Poweramp offers. For the best results, use it with a good pair of headphones or a stereo system.As for details: you get a 10 band equalizer, stand-alone tremble and bass controls plus Stereo X and an R/L balance knob. Of course, Stereo X is fully customizable as well but chances are that only tech-savvy people will touch that. Other than that, you get a bunch of equalizer presets plus the ability to save and load your own.It's true that learning how to use equalizers can be a little bit time consuming and tiresome at first. However, it's worth the effort.And if you don't feel like using the equalizer, well, that's okay. You're free to ignore its presence and use Poweramp as you would use your stock Android player. Just do keep in mind that you'll be missing out on the best part.

Poweramp offers a free trial of 15 days and the full version costs 4 euros. Do keep in mind that pricing may slightly differ from country to country due to taxes.

Why did we choose Poweramp as the best music player for Android?

Quite simply, because it offers the best audio quality. That's what music players are all about, playing music.True. Compared to other apps, some people may find the design to be a little bit dull or oversimplified. However, we believe that the superior audio quality that Poweramp offers more than makes up for any other issues that it may have.Overall, we give Poweramp a 9/10. Pretty close to perfection. And it would've gotten a perfect score if it wasn't for certain issues. More on that below.Some people have mentioned that they are experiencing crashes and issues with Android 8.0 or 8.1 devices. So, if you've got Android Oreo, the least that you can do is use the full trial to make sure that you won't waste your money.A new beta version of Poweramp has been in the works for a while now and it seems to work with Android Oreo. However, we still don't have any information on when it'll be released as a stable/official version.

Get Poweramp from the Google Play Store