Most of us have been interested on learning a language at least at one point of our lives. But, the truth is that most of us don't have the time and the energy to arrange language learning classes. This is why we decided to check out this app. Let's proceed with the Memrise review. 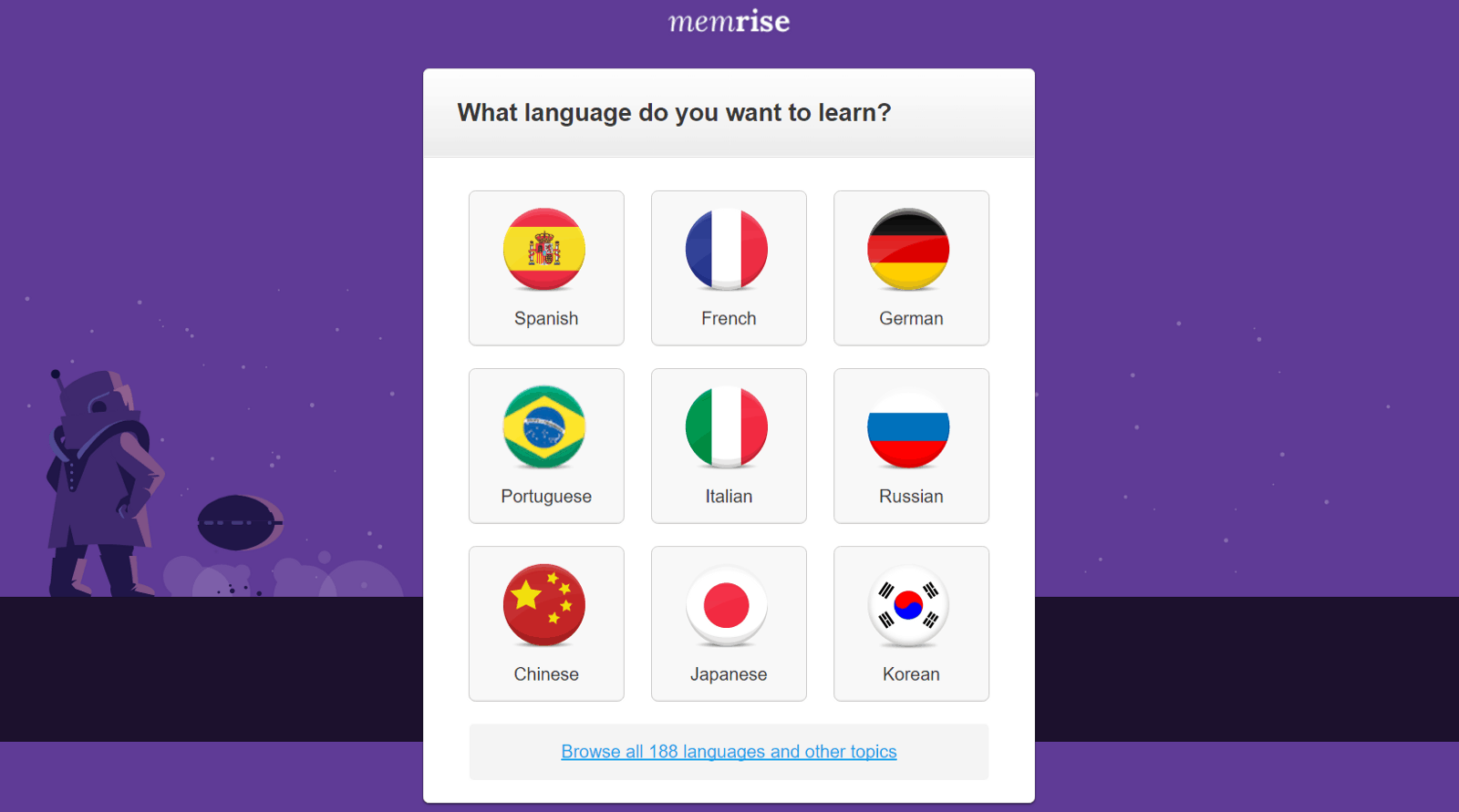 Memrise is a tool for learning languages. The only requirement is that you must already know English. After all, it's the base language.You've got anything from EU languages like French, Russian, and German, to Asian languages like Chinese, Japanese, etc.The concept of learning languages in Memrise is pretty simple. It shows you a word or phrase and its meaning in English. After that, it gives you a plethora of other words and you must choose the correct translation.It sounds terribly dull, but it's actually pretty fun. Especially with modes like "learning with locals". But, more on that later on.The fact that you can freely use it whenever you want is terribly convenient. Because you can learn a new language at your own pace without having to worry about appointments.The full version of the app costs about 20-40 euros per year, which is about $50 at worst. But, it allows you to use it for free up to a certain point so that you'll be able to decide if you like it or not.We already have the full version so that we'll be able to provide you with a full insight of how Memrise works and just how effective it is. Without any further ado, let's jump into the Memrise review.

Memrise has numerous learning modes to help you out with learning. To name them all:

We'll start our Memrise review with arguably the most important mode of this app and the one that you'll be using for most of the time. It basically gives you the translation of a word or phrase and you need to remember it. 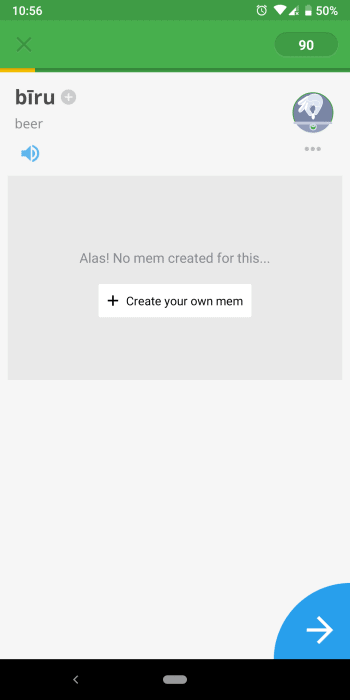 We went with Japanese since it's considered one of the most difficult languages to learn. As you can see in the image above, the translation for Biru is Beer. Easy enough, right?That's how Memrise starts. The first courses are always the easiest as you only need to remember single, simple words. However, as you move on up to the harder levels, you'll have to remember longer sentences and get a better understanding of how the language of your choice works. 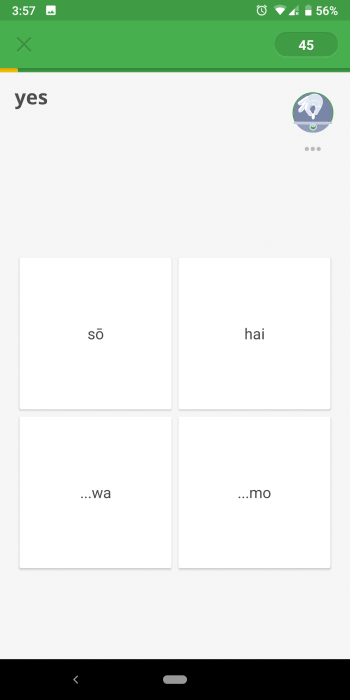 That's how Memrise knows if you've learned a word/phrase or not. It throws in a few other random words and you must pick the correct translation. Get it right a few times and you'll be allowed to move on up the difficulty ladder.

A skill only remains fresh for as long as you keep on practicing it. It's kinda the same thing with languages. For that reason, Memrise has implemented the classic review system where it throws in old words that you've already learned to make sure that you haven't forgotten them and also to make sure that you actually know them. 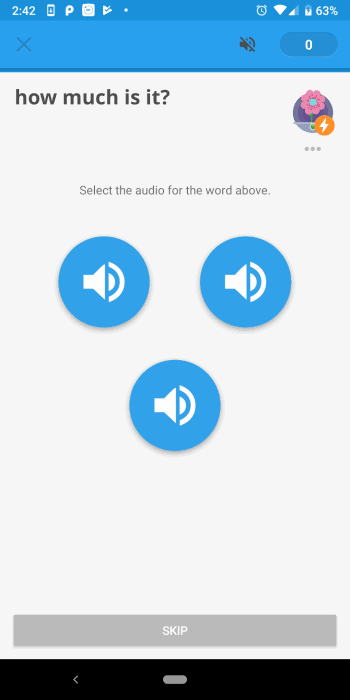 You've probably already noticed, but there are no written words here. Sometimes, the app will give you recorded words and phrases in the form of audio. In classic review, you get all kinds of variations. But, in other modes like "listening skills", you get pretty much nothing but audio.So, it's not all about simply remembering words. You must also get a decent understanding of pronunciation and the way that locals speak.For an example, you'll typically write and read "water" in exactly the same way regardless of where you are. But, British people generally pronounce it as "watah".That exact same thing happens in other languages as well which creates the need for understanding the pronunciation of locals. 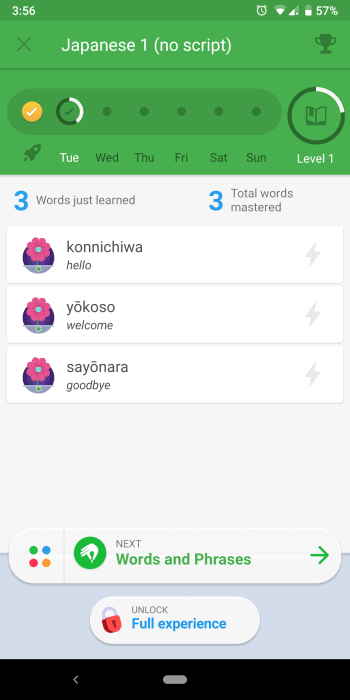 In the end of a session, you are being shown what words you just learned and how many you've mastered in your current course. After a bit of time, you'll have learned hundreds of words.

The speed review is more or less the same thing with classic review. The main difference is that you're now under pressure to find the correct word. 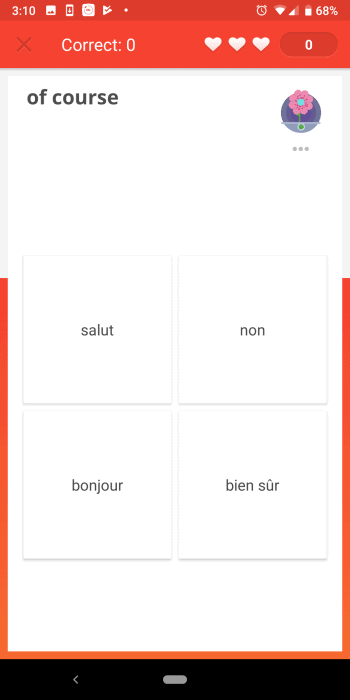 These red lines that you can see on the sides of the screen represent how much time you've got until you find the right word. Once the lines reach the top, you lose one of your hears. Lose all 3 of your hearts, and the speed review is over until next time.This is a good test to ensure that you've truly grasped the meaning of words and phrases. You don't have any time to sit there and find the appropriate translation - it has to be almost instant. That's how a real-life interaction works as well. So, no complaints from us here.Oh, by the way, we've switched to French here after completing almost two courses in Japanese just to check out how the app works in other languages as well.

This mode is by far the most difficult, or by far the easiest mode - depending on what language you're trying to learn. That's because choosing the right word phrase isn't enough. You must type it in manually letter by letter. 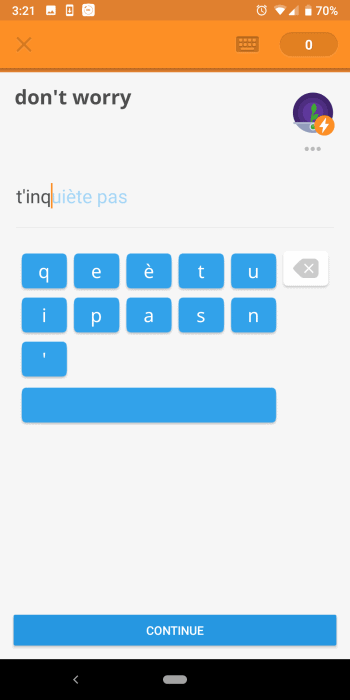 That's the point where it shows you how it's done. As we mentioned before, this is a fairly easy task in certain languages where everything is typed exactly in the way that you hear it.But, in other languages like French, this can become quite a challenge.

Listening skills is there to enhance your, well, listening skills. In this mode, you get pretty much nothing but audio recordings to work with. 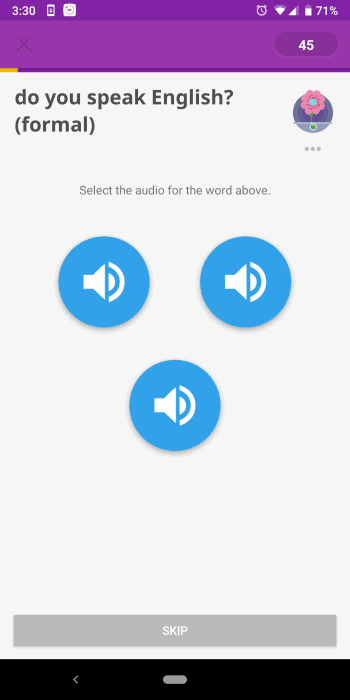 If you've already memorized the words and phrases that must, then this should be more or less a piece of cake. Sure, the pronounced words may sound a bit different compared to what you were reading and the voice that you were creating in your mind. But, you quickly get the hang of it.

This mode is more or less the same with listening skills. Except for this time, you also have a video of the person who is speaking and quite often background noise as well. 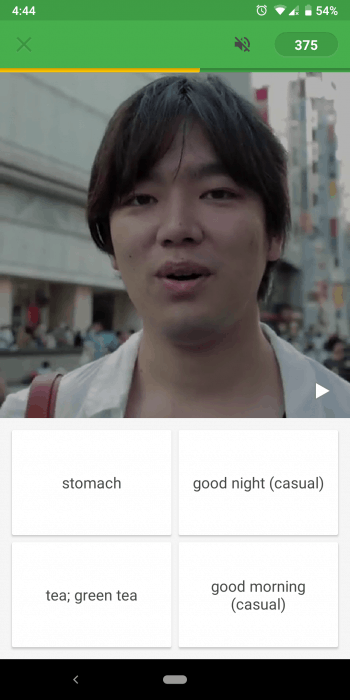 This feels way more realistic compared to "listening skills". Because in the real world, chances are that people aren't going to be speaking super slow and clear without any noise in the background.So, this mode clearly helps you in getting ready to listen and understand people who are speaking different languages. And that's without the embarrassment of not understanding a single thing face to face.At this point, we'd like to mention that the automatic navigation of Memrise tends to mess up sometimes and guide you to places where there's nothing to do. 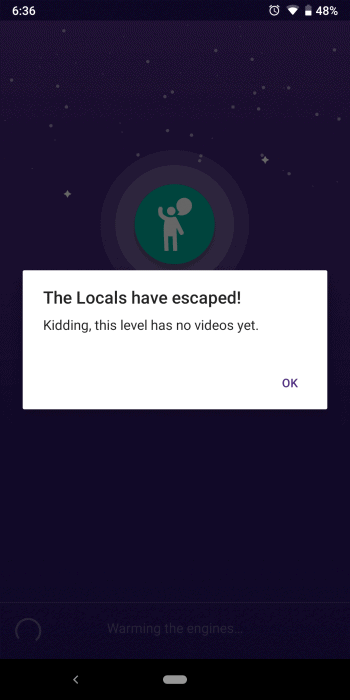 It's not a massive deal breaker. But, it's a tiny bit annoying and hopefully it'll get fixed soon.

Listening to people speaking is only one thing. Speaking is another. For that reason, you must practice with your voice as well. 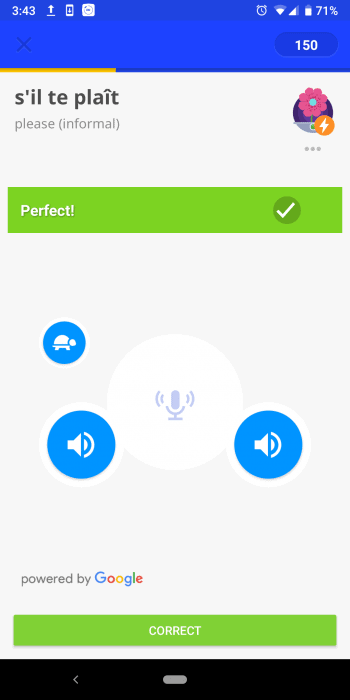 As you can see in the screenshot above, you get the chance to read, listen, and even slow down the recorded word or phrase. After that, you must pronounce it by using your phone's mic.Getting the pronunciation right in French was quite easy for us. Japanese, on the other, well, let's just say that we've seen better days. Not sure if it's the app that doesn't work well with Japanese or if we just suck that much at speaking that language.

Last, but not least in this Memrise review, the "learn grammar" mode. It's still in beta. But, it definitely has a lot of potential. 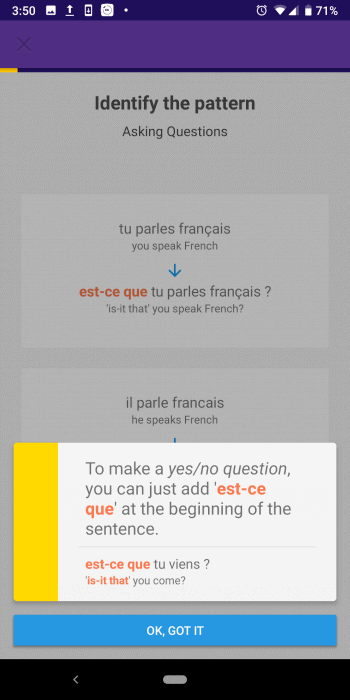 As you can see in the image above, instead of simply making you memorize sentences and words, this one gives you a deeper understanding of how the language works. That's much better than simply being a copycat.It definitely needs a lot of work. But, once it's ready, this will definitely be a massive gamer changer.

Language learning apps aren't going to replace teachers any time soon. But, if you can't afford to spend time and money into organizing private lessons, definitely give Memrise a try.

You may not manage to master a language simply by using this app. But, it's definitely a huge help into getting you started. The fact that you can use it whenever you want for as long as you want is a huge plus.This concludes our Memrise review. Feel like we forgot something important? Got something wrong? Then let us and everyone else know about it in the comments section down below!Like what you see? Then don't forget to follow us on Facebook and Twitter for the latest news, reviews, listicles, apps, games, devices, how-to guides, and more!